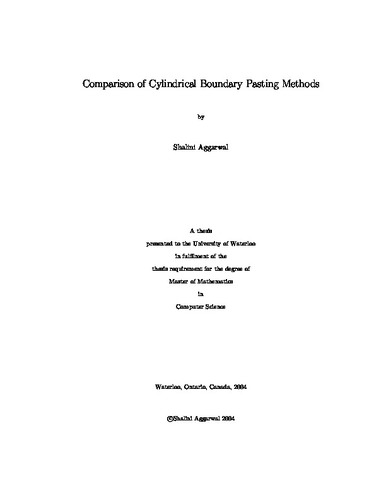 Surface pasting is an interactive hierarchical modelling technique used to construct surfaces with varying levels of local detail. The concept is similar to that of the physical process of modelling with clay, where features are placed on to a base surface and attached by a smooth join obtained by adjusting the feature. Cylindrical surface pasting extends this modelling paradigm by allowing for two base surfaces to be joined smoothly via a blending cylinder, as in attaching a clay head to the body using a neck. Unfortunately, computer-based pasting involves approximations that can cause cracks to appear in the composite surface. In particular this occurs when the pasted feature boundary does not lie exactly over the user-specified pasting region on the base surface. Determining pasted locations for the feature boundary control points that give a close to exact join is non-trivial, especially in the case of cylinders as their control points can not be defined to lie on their closed curve boundary. I propose and compare six simple methods for positioning a feature cylinder's control points such that the join boundary discontinuities are minimized. The methods considered are all algorithmically simple alternatives having low computational costs. While the results demonstrate an order of magnitude quality improvement for some methods on a convex-only curved base, as the complexity of the base surface increases, all the methods show similar performance. Although unexpected, it turns out that a simple mapping of the control points directly onto the pasting closed curve given on the base surface offers a reasonable cylindrical boundary pasting technique.