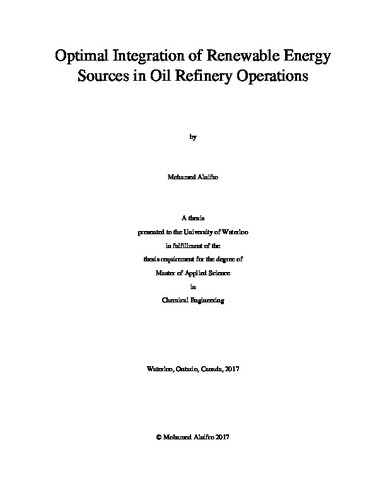 Petroleum refining is one of the energy intensive sectors of the oil and gas (O&G) industry. With increase in global energy demand and declining energy return on energy invested (EROEI) of crude oil, global energy consumption by the O&G industry has increased drastically over the past few years. In addition, this energy increase has led to an increase in GHG emissions, resulting in adverse environmental effects. On the other hand, electricity generation through renewable resources have become relatively cost competitive to fossil based energy sources in a much 'cleaner' way. In this study, renewable energy is integrated optimally into a refinery considering costs and CO2 emissions. Using Aspen HYSYS, a refinery in the Middle East was simulated to estimate the energy demand by different processing units. An LP problem was formulated based on existing solar energy systems and wind potential in the region. The multi-objective function, minimizing cost as well as CO2 emissions, was solved using GAMS to determine optimal energy distribution from each energy source to units within the refinery. Additionally, economic feasibility studies were carried out to determine the viability of renewable energy technology project implementation to overcome energy requirement of the refinery. Weights, α, were assigned to carbon dioxide emissions constraint and a Pareto front was constructed based on different scenarios. For α=0 (i.e. minimizing CO2 emissions), the total carbon dioxide emissions as well as the cost of producing electricity were 7.92x107 gCO2 and US$ 7.58x107, respectively. 56% of the electricity is generated through renewable energy technologies where Solar CSP, Solar PV and wind technologies contribute by 51%, 4% and 1%, respectively. The remainder of electricity demand is met by purchasing it from the national grid. For α=1 (minimizing cost), electricity is purchased solely from the grid with CO2 emissions and a cost of 5.43x108 gCO2 and US$ 2.96x107, respectively. From the feasibility studies, electricity generation through all renewable energy sources considered (i.e. solar PV, solar CSP and wind) were found feasible their low levelized cost of electricity (LCOE). The payback period for a Solar CSP project, with an annual capacity of about 411 GWh and a lifetime of 30 years, was found to be 10 years. In contrast, the payback period for Solar PV and Wind were calculated to be 7 and 6 years, respectively. This opens up possibilities for integrating renewables into the refining sector as well as optimizing multiple energy carrier systems within the crude oil industry.