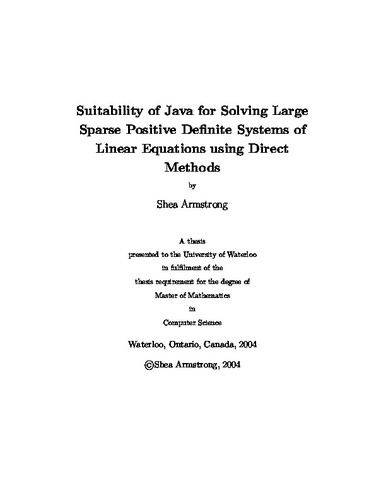 The purpose of the thesis is to determine whether Java, a programming language that evolved out of a research project by Sun Microsystems in 1990, is suitable for solving large sparse linear systems using direct methods. That is, can performance comparable to the language traditionally used for sparse matrix computation, Fortran, be achieved by a Java implementation. Performance evaluation criteria include execution speed and memory requirements. A secondary criterion is ease of development. Many attractive features, unique to the Java programming language, make it desirable for use in sparse matrix computation and provide the motivation for the thesis. The 'write once, run anywhere' proposition, coupled with nearly-ubiquitous Java support, alleviates the need to re-write programs in the event of hardware change. Features such as garbage collection (automatic recycling of memory) and array-index bounds checking make Java programs more robust than those written in Fortran. Java has garnered a poor reputation as a high-performance computing platform, largely attributable to poor performance relative to Fortran in its early years. It is now a consensus among researchers that the Java language itself is not the problem, but rather its implementation. As such, improving compiler technology for numerical codes is critical to achieving high performance in numerical Java applications. Preliminary work involved converting SPARSPAK, a collection of Fortran 90 subroutines for solving large sparse systems of linear equations and least squares problems developed by Dr. Alan George, into Java (J-SPARSPAK). It is well known that the majority of the solution process is spent in the numeric factorization phase. Initial benchmarks showed Java performing, on average, 3. 6 times slower than Fortran for this critical phase. We detail how we improved Java performance to within a factor of two of Fortran.