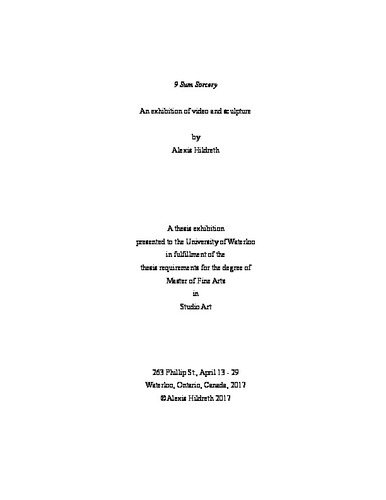 9 Sum Sorcery is a multimedia exhibition comprised of video and sculpture. Nine screens depict 'The Player' performing with an assortment of augmented found materials within the framework of a board game. The Player continually re-organizes the components of the game-space (a social, political, psychological, and spiritual body) in an attempt to come to terms with their place in it. In addition to appearing in the videos, the game's components are present physically in the gallery, enclosed in a vitrine. Each video offers a first-person perspective of The Player in various states of communion with the game system. This system complicates itself through The Player's desire to simultaneously project narrative onto, and remove narrative from, the components of the game. 9 Sum Sorcery encourages engagement in a spiritual ordeal, where the potential for transformative power can become an ossifying psychosis in the absence of The Player's and the visitors' capacity to de-code and re-code meaning.