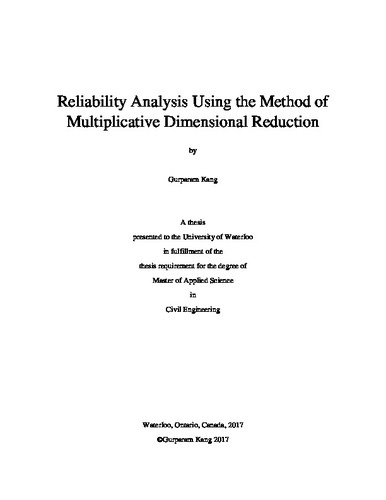 Traditional engineering analyses and designs are based on deterministic input variables, and variability seen in the real world are often ignored to simplify the work. Formal reliability analyses are generally avoided by engineers due to large computational costs associated with the traditional methods, such as simulations. Analysis done by engineers in this age of advanced technology are done using finite element analysis which further increase the computational cost of analyzing a reliability problem . Using reliability methods such as Monte Carlo Simulation (MCS) with a finite element analysis requires thousands of trials to be done. This ultimately is not feasible for a complex problem which takes long computational time. Multiplicative Dimensional Reduction Method (MDRM) is a tool which can be used to calculate the statistical parameters of the response of a function with a large reduction in computational efforts. This method has not been applied to uncertainty analysis, geomechanics and fire resistant design problems to determine if this method is indeed worth using over traditional reliability methods (MCS). The Cubature method is another tool which can be used to calculate the statistical moments of a response. This method will be compared to MCS and MDRM to determine its effectiveness. The research objectives in this thesis are therefore 1) to determine if the code developed to use MDRM provides accurate results, 2) to compare the results of MDRM and Cubature to MCS to see how accurate the results of MDRM and Cubature are based on equation based problems, 3) to determine the feasibility of using MDRM with uncertainty analysis problems (where epistemic and aleatory variables are defined), 4) to determine the feasibility of solving a MDRM reliability analysis for fire resistant design problems and 5) to determine the feasibility and computational efficiency of using MDRM for geomechanics problems which are both equation based and finite element analysis. To perform the first objective a problem from Zhang & Pandey (2013) was redone using the code that was developed to make sure the results matched. The second objective was performed by solving steam generator tube failure problem and a time to leak of a pipe problem. The third objective was performed by solving the time to leak of a pipe problem again but this time designating one variable as epistemic and another as aleatory and comparing results between MDRM and MCS. To perform the fourth objective a performance based approach is outlined on how to calculate fire resistant design of a protected and unprotected beam. The results from MDRM and MCS are compared. The fifth and final objective is performed by first showing a step by step method on how to apply MDRM while solving a uni-dimensional consolidation example (settlement of foundation). Lastly two finite element analysis problems are solved to show the application of MDRM with the combination of a finite element analysis. The first problem is of vertical drains and the second problem is of a concrete infinite beam on an elastic foundation. These problems are done using MDRM and MCS and the results and computational effort are compared.