Development of an Arabic Continuous Text Near Acuity Chart 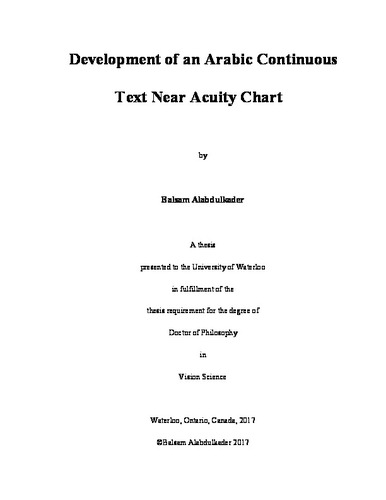 Purpose: Near visual acuity is an essential measurement during an oculo-visual assessment. Continuous text near visual acuity charts measure reading acuity and other aspects of reading performance. Arabic is ranked as the fourth spoken language globally. Yet, there are no standardized continuous text near visual acuity charts in Arabic. The aims of this study are to create and compose a large pool of standardized sentences, to validate these sentences in children and adults and choose a final set with equal readability to use in the development of a standardized Arabic continuous text reading chart, and then to design and validate the first standardized Arabic continuous text near visual acuity chart, the Balsam Alabdulkader-Leat (BAL) chart. Methods: Initially, 90 Arabic pairs of sentences were created for use in constructing a chart with similar layout to the Colenbrander chart. They were created following accepted criteria for creating sentences for near visual acuity charts. They had the same grade level of difficulty and physical length. Fifty-three Arabic-speaking adults and sixteen children were recruited to validate the sentences. Reading speed in correct words per minute (CWPM) and standard length words per minute (SLWPM) were measured and errors were counted. Elimination criteria based on reading speed and errors made in each sentence pair were applied to exclude sentence pairs with more outlying characteristics, and to select the final group of sentence pairs. The final sub-set of validated sentences was used in the construction of three versions of the BAL chart. Eighty-six bilingual adults with normal vision aged 15 to 59 years were recruited to validate the charts. Reading acuity and reading speed in standard words per minute were measured for the three versions of the BAL chart and three English charts (MNREAD, Colenbrander, and Radner charts). The Arabic version of the IReST chart was used to test the validity of the BAL chart in measuring reading speed. ANOVA was used to compare reading acuity and reading speed in standard words per minute. Bland-Altman plots were used to analyze agreement between the charts. Normal visual acuity (0.00 logMAR) was calibrated for the BAL chart with linear regression between the reading acuity of the BAL chart against reading acuity measured with the MNREAD and the Radner charts. Results: Forty-five sentence pairs were selected according to the elimination criteria. For adults, the average reading speed for the final sentences was 166 CWPM and 187 SLWPM and the average number of errors per sentence pair was 0.21. Childrens’ average reading speed for the final group of sentences was 61 CWPM and 64 SLWPM. Their average error rate was 1.71. The Cronbach’s alpha for the final set of sentence pairs in CWPM and SLWPM was 0.986 for adults and 0.996 for children, showing that the final sentences had very good internal consistency. Three versions of the BAL chart were created. Each chart had fifteen print size levels. Average reading acuity for BAL1, BAL2 and BAL3 was 0.62, 064 and 0.65 log-point print respectively (equivalent to -0.08, -0.06 and -0.05 logMAR respectively). These differences in reading acuity among the BAL charts were statistically significantly different (repeated measures ANOVA, p < 0.05), but not considered clinically significant. Average reading acuity for the Colenbrander, MNREAD and Radner charts was -0.05, -0.13 and -0.03 logMAR respectively. The coefficient of agreement for reading acuity between the BAL charts was 0.054 (between BAL1 and BAL2), 0.061 (between BAL2 and BAL3) and 0.059 (between BAL1 and BAL3). Linear regression between the average reading acuity for the BAL chart and the MNREAD and Radner charts showed that 0.7 log-point size is equivalent to 0.00 logMAR. The new BAL chart was labelled accordingly. Mean SLWPM for the BAL charts was 201, 195 and 195 SLWPM respectively and for the Colenbrander, MNREAD and Radner charts was 146, 171 and 146 respectively. The coefficients of agreement for log-SLWPM between BAL1 and BAL2, BAL2 and BAL3 and BAL1 and BAL3 were 0.063, 0.064 and 0.057 log SLWPM respectively. Conclusions: The reliability analysis showed that the final 45 sentence pairs are highly comparable. They were used in constructing three versions of the BAL chart. The BAL chart showed high inter-chart agreement and can be recommended for accurate near performance measures in Arabic for both research and clinical settings.