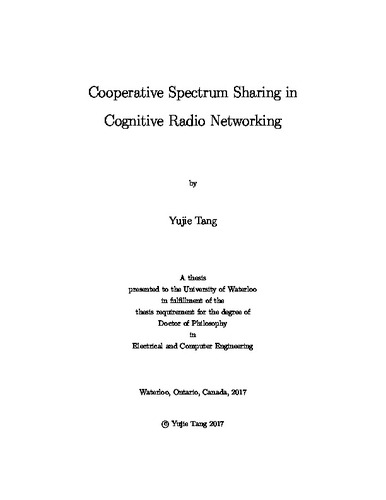 Driven by the massive growth in communications data traffic as well as flourishing users' demands, we need to fully utilize the existing scarce spectrum resource. However, there have been several studies and reports over the years showing that a large portion of licensed spectrum is actually underutilized in both temporal and spatial domains. Moreover, aiming at facing the dilemma among the fixed spectrum allocation, the ever enormous increasing traffic demand and the limited spectrum resource, cognitive radio (CR) was proposed by Mitola to alleviate the under usage of spectrum. Thus, cognitive radio networking (CRN) has emerged as a promising paradigm to improve the spectrum efficiency and utilization by allowing secondary users (SUs) to utilize the spectrum hole of primary users (PUs). By using spectrum sensing, SUs can opportunistically access spectrum holes for secondary transmission without interfering the transmissions of the PUs and efficient spectrum utilization by multiple PUs and SUs requires reliable detection of PUs. Nevertheless, sensing errors such as false alarm and misdetection are inevitable in practical networks. Hence, the assumption that SUs always obtain the exact channel availability information is unreasonable. In addition, spectrum sensing must be carried out continuously and the SU must terminate its transmission as soon as it senses the re-occupancy by a PU. As a better alternative of spectrum sensing, cooperation has been leveraged in CRN, which is referred as cooperative cognitive radio networking (CCRN). In CCRN, in order to obtain the transmission opportunities, SUs negotiate with the PUs for accessing the spectrum by providing tangible service for PUs. In this thesis, we study cluster based spectrum sharing mechanism for CCRN and investigate on exploiting the cooperative technique in heterogeneous network. First, we develop cooperation protocols for CRN. Simultaneous transmission can be realized through quadrature signalling method in our proposed cooperation protocol. The optimal power allocation has been analyzed and closed-form solution has been derived for amplify and forward mode. Second, we study a cluster based spectrum sharing mechanism. The spectrum sharing is formulated as a combinatorial non-linear optimization problem which is NP-hard. Afterwards, we solve this problem by decomposing it into cluster allocation and time assignment, and we show that the result is close to the optimal solution. Third, we propose a macrocell-femtocell network cooperation scheme for heterogeneous networks under closed access mode. The cooperation between the femtocell network and macrocell network is investigated. By implementing the cooperation, not only the macrocell users' (MUEs') and femtocell users' (FUEs') utility can be improved compared with the non-cooperation case, but also the energy consumption as well as the interference from the femtocell network to the macrocell network can be reduced.