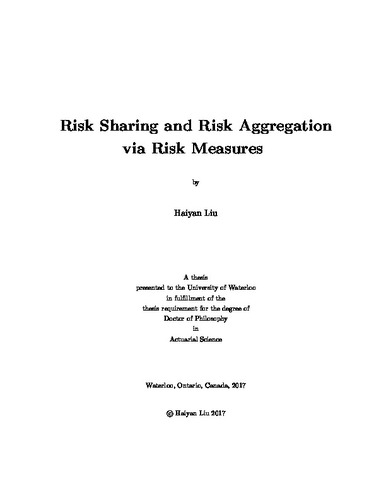 Risk measures have been extensively studied in actuarial science in the guise of premium calculation principles for more than 40 years, and recently, they have been the standard tool for financial institutions in both calculating regulatory capital requirement and internal risk management. This thesis focuses on two topics: risk sharing and risk aggregation via risk measures. The problem of risk sharing concerns the redistribution of a total risk among agents using risk measures to quantify risks. Risk aggregation is to study the worst-case value of aggregate risks over all possible dependence structures with given marginal risks. On the first topic, we address the problem of risk sharing among agents using a two-parameter class of quantile-based risk measures, the so-called Range-Value-at-Risk (RVaR), as their preferences. The family of RVaR includes the Value-at-Risk (VaR) and the Expected Shortfall (ES), the two popular and competing regulatory risk measures, as special cases. We first establish an inequality for RVaR-based risk aggregation, showing that RVaR satisfies a special form of subadditivity. Then, the Pareto-optimal risk sharing problem is solved through explicit construction. We also study risk sharing in a competitive market and obtain an explicit Arrow-Debreu equilibrium. Robustness and comonotonicity of optimal allocations are investigated, and several novel advantages of ES over VaR from the perspective of a regulator are revealed. Reinsurance, as a special type of risk sharing, has been studied extensively from the perspective of either an insurer or a reinsurer. To take the interests of both parties into consideration, we study Pareto optimality of reinsurance arrangements under general model settings. We give the necessary and sufficient conditions for a reinsurance contract to be Pareto-optimal and characterize all such optimal contracts under more general model assumptions. Sufficient conditions that guarantee the existence of the Pareto-optimal contracts are obtained. When the losses of an insurer and a reinsurer are measured by the ES risk measures, we obtain the explicit forms of the Pareto-optimal reinsurance contracts under the expected value premium principle. On the second topic, we first study the aggregation of inhomogeneous risks with a special type of model uncertainty, called dependence uncertainty, in individual risk models. We establish general asymptotic equivalence results for the classes of distortion risk measures and convex risk measures under different mild conditions. The results implicitly suggest that it is only reasonable to implement a coherent risk measure for the aggregation of a large number of risks with dependence uncertainty. Then, we bring the well studied dependence uncertainty in individual risk models into collective risk models. We study the worst-case values of the VaR and the ES of the aggregate loss with identically distributed individual losses, under two settings of dependence uncertainty: (i) the counting random variable and the individual losses are independent, and the dependence of the individual losses is unknown; (ii) the dependence of the counting random variable and the individual losses is unknown. Analytical results for the worst-case values of ES are obtained. For the loss from a large portfolio of insurance policies, the asymptotic equivalence of VaR and ES is established, and approximation errors are obtained under the two dependence settings.