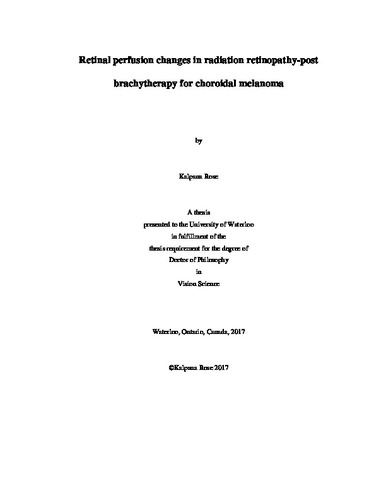 Introduction: Radiation retinopathy (RR) is a chronic progressive vasculopathy developing secondary to the impact of ionizing radiation to the retina. RR develops post radiation therapy using radioactive plaque to treat intraocular tumors. It is not possible to predict which patients will develop RR. Changes in retinal blood oxygen saturation and blood flow could predict the future onset of RR, thereby facilitating the use of treatment such as intra-vitreal anti-vascular endothelial growth factor (VEGF). Methods: Chapter 3 and 4: Total retinal blood flow (TRBF) and retinal blood oxygen saturation (SO2) was non-invasively measured in eleven healthy human volunteers using a novel and exact provocation technique (RespirAct) that allows the precise control of the end-tidal partial pressure of oxygen (PETO2). Between-visits repeatability and within-visit variability of TRBF and SO2 measurements were assessed. Inner retinal oxygen delivery and consumption was calculated using Fick’s principle during stages of normoxia, hypoxia and hyperoxia. Chapter 5 and 6: Seventeen patients diagnosed with unilateral choroidal melanoma (CM) and eight patients who had developed unilateral ischemic RR were recruited from Ocular Oncology Clinic in the Princess Margaret Hospital, Toronto, Canada i.e. the only center all over Canada to treat CM patients with radiation therapy. The subjects underwent measurement of TRBF using a prototype methodology based upon Doppler Spectral Domain Optical Coherence Tomography (SD-OCT) and retinal vessel SO2 using a prototype Hyperspectral Retinal Camera (HRC), following pupil dilation with 1% tropicamide. In CM patients, the retinal hemodynamic parameters were studied in both eyes, before, 3months and 6months post 125Iodine plaque brachytherapy treatment. For RR patients, the measurements were taken once in both eyes after confirming the ischemic changes by wide-field fluorescein angiography. Results: Chapter 3 and 4: When the arterial PETO2 (end-tidal partial pressure of oxygen) was increased from baseline (PETO2=100mmHg) to 200 and 300mmHg, the TRBF significantly reduced (p=0.020) from 44.60 μL/min (+8.9) to 40.28 μL/min (+8.9) and 36.23 μL/min (+4.6), respectively. Retinal arteriolar SO2 (SaO2) did not show any significant change during PETO2 of 200 and 300mmHg, compared to baseline. However, retinal venular SO2 (SvO2) significantly increased (p<0.000) from 57.2% (+3.9) to 61.3% (+3.6) and 62.0% (+3.4) during PETO2 of 200 and 300mmHg, respectively, compared to baseline. Lowering the arterial PETO2, from baseline to 80, 60 and 50mmHg, TRBF significantly increased (p=0.040) from 43.17 μL/min (+12.7) to 45.19 μL/min (+5.5), 49.71 μL/min (+13.4) and 52.89 μL/min (+10.9) with simultaneous reduction in the SaO2 and SvO2 from 99.3 % (+ 5.8) and 56.3% (+ 4.2) to 95.6% (+ 5.1) and 52.5 (+ 4.1), 89.6% (+ 2.8) and 49.5% (+ 2.9), 83.3% (+ 3.9) and 45.0 % (+ 6.1), respectively (p<0.000). The group mean coefficient of repeatability (COR) for the retinal blood SaO2, SvO2 and TRBF were 18.4% (relative to a mean effect of 104.4%), 15.2% (relative to a mean effect of 60.3%), and 21.8 μL/min (relative to a mean effect of 44.72 μL/min). The overall coefficient of variability (COV) for SaO2, SvO2 and TRBF measurements were 4.7% and 6.9%, and, 15.1% respectively. The inner retinal oxygen extraction was calculated as 3.64 mLO2/min/100g tissue in humans. Chapter 5: The average TRBF in the eye with RR was significantly lower compared to the fellow eye (33.48 + 12.73 µL/min vs 50.37 + 15.26 µL/min; p = 0.013). The SaO2 and SvO2 was higher in the retinopathy eye compared to the fellow eye (101.11 + 4.26%, vs 94.45 + 5.79%; p=0.008) and (62.96 + 11.05% vs 51.24 + 6.88%, p=0.051), respectively. Chapter 6: Out of 17 CM patients recruited, 2 patient data was excluded due to poor image quality, and 3 others were lost to follow-up. During the six month follow up period, one person developed RR. The SaO2 measurement was found to be significantly increased (p=0.026) from 94.4 % (+7.9) to 98.9% (+8.8) and 100.6 % (+6.4), respectively during 3 and 6 month follow up post 125Iodine plaque brachytherapy compared to before treatment. Conclusions: Chapter 3: Our study demonstrated significant changes in retinal blood SO2 and TRBF during systemic changes in arterial PETO2. The variability in TRBF measurements may reflect the impact of subjective assessment in venous area estimation as well as Doppler signal strength differences between visits. One needs to note that, a common clinical test such as visual acuity measurement also has a reported variability of up to ±0.15 logMAR (or + 8 logMAR letters), relative to a mean effect of 0.017 logMAR (+ 4.2 letters), yet it is still being utilized as a useful clinical tool. The Doppler SD-OCT and HRC offer a quantifiable and repeatable technique of assessing retinal hemodynamics. Minimizing subjectivity in terms of blood flow analysis as well as correcting imperfections in the optics design of the HRC could possibly improve the repeatability of TRBF and retinal blood SO2, respectively. Chapter 4: Oxygen extracted from the inner retinal vessels remains unchanged during safe levels of systemic hypoxia and hyperoxia. Chapter 5: The effect of ionizing radiation has an impact on the TRBF and retinal blood SO2, clinically presenting similar to a rapidly developing diabetic retinopathy. The results show an altered retinal vascular physiology in patients with radiation related retinopathy. Chapter 6: 125Iodine brachytherapy significantly increases the retinal arteriolar blood SO2, suggesting improved retinal tissue perfusion in the treated eye. It is interesting to note that one patient developed RR in this six month period. About a 20% increase in retinal arteriolar and venular blood oxygen saturation was observed in this patient, 6 month post brachytherapy compared to pre-treatment value. In order to predict who will develop RR following brachytherapy, it is important to follow up rest of the eleven subjects to measure SO2 and TRBF during 12 and 18 month period or until they develop retinopathy. This will be a future work of interest, to recruit even large number of CM patients in a longitudinal approach. Only then a pattern or model for predicting RR in terms of SO2 or TRBF measurements could be established. The study examines the early effects of brachytherapy on retinal hemodynamics.