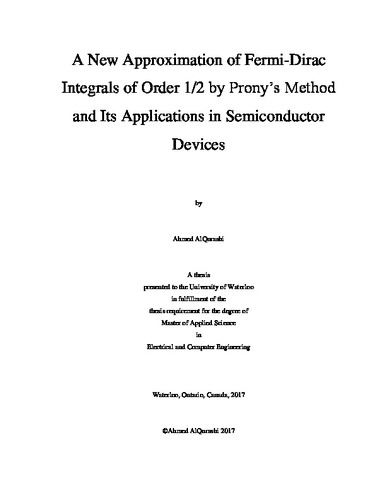 Electronic devices are vital for our modern life. Semiconductor devices are at the core of them. Semiconductor devices are governed by the transport and behavior of electrons and holes which in turn are controlled by Fermi-Level or the Quasi-Fermi Level. The most frequently used approximation for the population of electrons and holes based on the Boltzmann approximation of Fermi-Dirac distribution. However when the Fermi-level is closer to the majority carrier band edge, by less than 3kT, it causes significant errors in the number of the carriers. This in turn causes errors in currents and other quantities of interest. In heavily doped semiconductors, it is desirable to use Fermi-Dirac Integral itself. However this is a tabulated function and therefore approximations are developed. Most of the approximation are mathematically cumbersome and complicated and they are not easily differentiable and integrable. Although several approximations have been developed, some with very high precision, these are not simple nor are they sufficiently useful in semiconductor device applications. In this thesis after exploring and critiquing these approximations, a new set of approximations is developed for the Fermi-Dirac integrals of the order 1/2. This analytical expression can be differentiated and integrated, still maintaining high accuracy. These new approximation is in the form of an exponential series with few terms using Prony’s method. Application of this approximation for semiconductor device calculations are discussed. Substantial errors in carrier densities and Einstein relation are shown when compared with Boltzmann approximation. The efficacy of the approximation in the calculation of Junctionless transistor quantities is demonstrated as an example.

Ahmed ALqurashi (2017). A New Approximation of Fermi-Dirac Integrals of Order 1/2 by Prony’s Method and Its Applications in Semiconductor Devices. UWSpace. http://hdl.handle.net/10012/11691