An eye (region) sensitivity during early face perception: The N170 is modulated by facial context and featural fixation 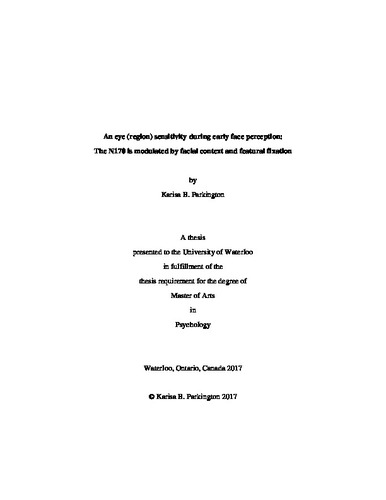 The N170 is a face-sensitive ERP component that also demonstrates a particular sensitivity to the eyes. Specifically, the N170 responds maximally to isolated eye regions (i.e., two eyes), as well as to eye fixations within a face. Here I compared N170 modulations when facial features (left eye, right eye, nasion, nose, and mouth) were fixated in isolation or within a full face. Fixation on the desired feature was continuously enforced using a gaze-contingent eye-tracking procedure. In order to further assess this eye sensitivity, I also compared the N170 response to single isolated eyes and the classically-used eye region. The N170 was largest and most delayed when features were fixated in isolation, compared to equivalent fixations in a full face. An eye sensitivity within a face context was observed, with larger N170 amplitudes elicited when the left or right eye was fixated. Mouth fixation yielded the smallest and most delayed N170 within a face, and showed the largest amplitude difference between fixation in isolation and fixation within a face. For isolated features, single eyes did not differ from mouths, yielding significantly larger and faster N170 responses compared to isolated noses. Alternatively, isolated eye regions elicited consistently larger and shorter N170 responses compared to single isolated eyes, irrespective of eye or nasion fixation. These results highlight the importance of the eyes in early face perception, and provide compelling support for an interplay between featural and holistic neural mechanisms. These findings also provide novel evidence of an increased sensitivity to the presence of two symmetric eyes within the eye region compared to only one eye, consistent with an eye region detector rather than an eye detector per se.