Granular Activated Carbon for the Removal of Seasonally Present Microcystin-LR 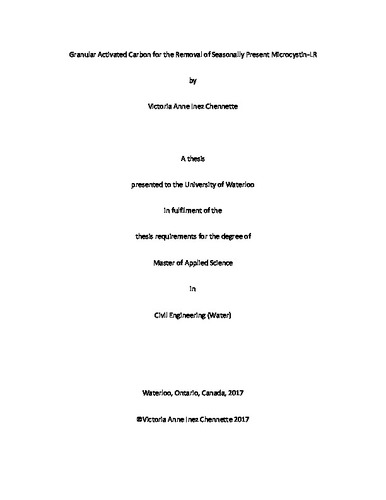 Microcystin-LR (MC-LR) is a potent hepatotoxin, produced by cyanobacteria. MC-LR is the most commonly regulated cyanotoxin. MC-LR typically occurs seasonally in late summer in temperate regions, such as the North American Great Lakes region. Nutrient and temperature conditions lead to the annual formation of cyanobacterial blooms, most notably in shallower Lake Erie. Adsorption using granular activated carbon (GAC) is a promising treatment technology for the removal of cyanotoxin MC-LR. The operation of a GAC contactor on a seasonal basis, and the storage of GAC between annual events were the focus of this work. A typical GAC in the study geographic area, Calgon Filtrasorb ® 300 (F300), was selected for this work. In order to simulate one season of use, the F300 was preloaded with 20,000 bed volumes of post-filtration Lake Ontario water from a full-scale drinking water treatment plant. The preloading period was determined from the volume of water passed through the full-scale plant when cyanobacterial metabolites geosmin and 2-methylisoborenol had historically been detected. During preloading the water quality was consistent in terms of Total (TOC) and dissolved (DOC) organic carbon. The largest contributor to natural organic matter (NOM) was humics as determined by liquid chromatography organic carbon detection (LC-OCD). The virgin and preloaded F300 were evaluated in terms of ultimate capacity and kinetics for MC-LR adsorption. The bottle point method was used, with samples taken daily for the first ten days, and every two days following until less than 1% change in percentage removal was observed. MC-LR was quantified using LC-MS/MS (liquid chromatography tandem mass spectrometry). The virgin F300 reached equilibrium after 18 days, and the preloaded reached equilibrium after 49 days. The preloaded and virgin F300 did not show significantly different Freundlich isotherm parameters, indicating that the preloaded F300 was not significantly exhausted following one season of preloading. This finding should be interpreted with caution, as there may be differences which are not detectable at the selected confidence level. The preloaded F300 was then stored under four conditions for eight months (the typical portion of the year in which cyanobacterial blooms are uncommon in temperate regions). Storage conditions included high moisture content (HMC) and low moisture content (LMC), to represent the bottom and top, respectively, of a drained GAC contactor. Two fully saturated conditions were explored; the F300 was stored completely submerged in post-filtration water from the full scale facility, and the F300 was stored fully submerged in a 20 g/L salt (sodium chloride) solution. In addition, a continuous operational control located at the full-scale pant was maintained at the same hydraulic loading rate as the full-scale filters in order to simulate a GAC contactor which remained in service year round. The time to equilibrium for each carbon was evaluated; the salt storage samples reached equilibrium (less than 1% change in percent removal) after 41 days, and displayed the fastest kinetics for MC-LR removal. The submerged storage method displayed the slowest kinetics, and reached equilibrium after 57 days. At the 95% confidence level, all of the stored F300 Freundlich isotherm parameters were significantly different from the continuous operational control, indicating that there may be a benefit from storage under any of the considered conditions. When the broader prediction intervals are considered, there was no significant difference in any of the predicted MC-LR solid phase concentrations when considering various MC-LR liquid phase concentrations. This finding indicates that non-detectable differences may be present, due to the data quality. When compared with the virgin and preloaded F300, the continuous operational control is distinct from the virgin and preloaded isotherm parameters at the 95% confidence level. At the 95% confidence level, the virgin, preloaded and LMC stored carbon parameters for MC-LR removal are not distinct. Although capacity for MC-LR cannot be directly determined simply by examining the Freundlich parameters, the results suggest that the storage of the F300 under LMC conditions provides a benefit in terms of equilibrium capacity. Overall, this research indicates that there is a benefit in terms of capacity and kinetics from the storage of the preloaded F300, under any of the considered conditions. There is an indication that the LMC storage may provide the most benefit, however additional confirmation is required to establish this finding with statistical significance.