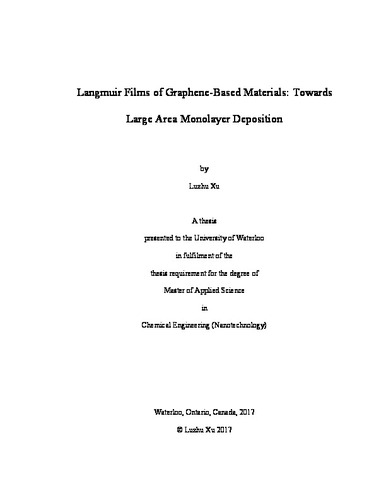 Graphene-based materials have attracted considerable interest due to their potential use in a broad range of applications including membrane separations, electronic devices and biomaterials. Their performance in many of these applications relies on the ability to precisely control the layer number and density of films over large areas. Chemical vapor deposition (CVD) is one of the most promising methods to produce single layer graphene. However, the high cost, limited choice of substrates and error-prone transfer processes limit its application. On the other hand, laboratory-scale film processing approaches like spin/spray-coating, filtration and drop-casting are incapable of producing films with nanometer-scale control of film thickness and uniformity and/or over the large length scales required for many applications. Recently, the Langmuir-Blodgett (LB) deposition technique has been applied to graphene and graphene oxide with some success. In this method, the material is dispersed at the air-water interface, the floating material, held up by surface tension, is densified by the compression of two floating barriers and the resulting film is transferred onto substrates by dip coating. While good control over layer number and film density has been achieved, the technique is currently limited to small area films and suffers from the challenge that only ~1% of the material is retained at the interface during transfer while the rest is lost in the sub-phase. In this work, we developed a directed assembly process for producing GO monolayers at the air-water interface which assemble into densely tiled films without the requirement to use adjustable barriers. We demonstrate that the resulting directional film growth is amenable to roll-to-roll fabrication. By choosing a suitable spreading solvent, we obtained high-yield transfer to the air-water interface measuring Langmuir surface areas as high as 800 m2/g. Furthermore, we used both in situ Brewster angle microscopy and a custom-made Langmuir-Adam balance to study the mechanism of film formation. We also successfully extended our process to monolayer films of other 2D nanomaterials such as MoS2. As a first example of the utility of these films, we deposit dense GO monolayers onto silver nanowire transparent electrodes and demonstrate their ability to protect the nanowires from degrading under high currents.