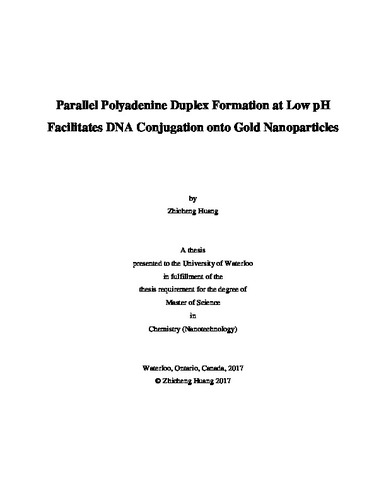 DNA-functionalized gold nanoparticles (AuNPs) have been extensively used in sensing, drug delivery, and materials science. A key step is to attach DNA onto AuNPs forming a stable and functional conjugate. While the traditional salt-aging method takes a full day or longer, a recent low-pH method allows DNA conjugation to happen in a few minutes. The effect of low pH was previously attributed to protonation of adenine (A) and cytosine (C), resulting in an overall lower negative charge density on DNA which is helpful for conjugating onto citrate-capped AuNPs. However, this simple charge argument does not answer why poly-A DNA works better than poly-C DNA. In addition to protonation, at low pH, DNA rich in adenine and cytosine could form higher secondary structures (e.g. the A-motif for poly-A DNA and i-motif for poly-C DNA). We suspect that such DNA folding might also play a role in DNA conjugation to AuNPs. In this thesis, the effect of DNA conformation at low pH is studied. Using circular dichroism (CD) spectroscopy, parallel poly-A duplex (A-motif) is detected when a poly-A segment is linked to a random DNA, a design typically used for DNA conjugation. A DNA staining dye, thiazole orange, is identified for detecting such A-motifs. We found that the A-motif structure is ideal for DNA conjugation since it exposes the terminal thiol group adjacent to the poly-A for directly reacting with the gold surface while minimizing non-specific DNA base adsorption. Keeping this in mind, the order of reagent addition was further studied. However, for non-thiolated DNA, if the A-motif structure can be formed before the DNA is mixed with AuNPs, alternatively, the sample can be acidified after mixing AuNPs and DNA to then promote A-motif formation. Our results showed that the latter method is better. By taking DNA conformation into consideration, we can also explain the less optimal performance of the C-rich DNA. The i-motif formed by poly-C DNA at low pH is less favorable for the conjugation reaction due to its unique way of folding. Finally, the stability of poly-A and poly-G DNA in low pH also is examined due to the concerns related to DNA depurination and subsequent cleavage. An excellent stability of poly-A DNA is confirmed, while poly-G has slightly lower stability. Overall, the stability is sufficient for the low pH method for DNA attachment. This study provides new fundamental insights into a practically useful technique of conjugating DNA to AuNPs.