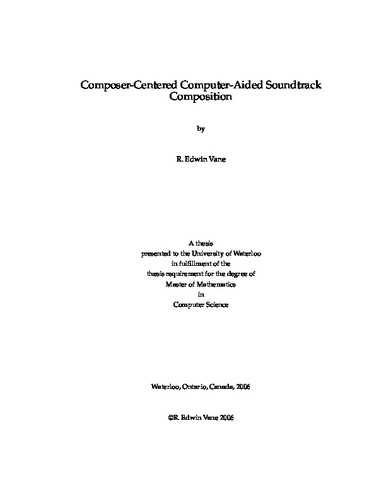 For as long as computers have been around, people have looked for ways to involve them in music. Research in computer music progresses in many varied areas: algorithmic composition, music representation, music synthesis, and performance analysis to name a few. However, computer music research, especially relating to music composition, does very little toward making the computer useful for artists in practical situations. This lack of consideration for the user has led to the containment of computer music, with a few exceptions, to academia. <br /><br /> In this thesis, I propose a system that enables a computer to aide users composing music in a specific setting: soundtracks. In the process of composing a soundtrack, a composer is faced with solving non-musical problems that are beyond the experience of composers of standalone music. The system I propose utilizes the processing power of computers to address the non-musical problems thus preventing users from having to deal with them. Therefore, users can focus on the creative aspect of composing soundtrack music. <br /><br /> The guiding principal of the system is to help the composer while not assuming any creative power and while leaving the user in full control of the music. This principal is a major step toward helping users solve problems while not introducing new ones. I present some carefully chosen tasks that a computer can perform with guidance from the user that follow this principal. For example, the system performs calculations to help users compose music that matches the visual presentation and allows users to specify music, using the idea of <strong>timed regular expressions</strong>, so that a computer can fill arbitrary amounts of time with music in a controlled manner. <br /><br /> A prototype application, called <strong>EMuse</strong>, was designed and implemented to illustrate the use and benefits of the proposed system. To demonstrate that the system is capable of serving as a tool to create music, two soundtracks were created for two sample animations. It is beyond the scope of the work presented here to evaluate if the system achieves the goal of being a practical tool for composers. However, the innovations herein discussed are analyzed and found to be useful for soundtrack composition and for future user-centered computer-music research.