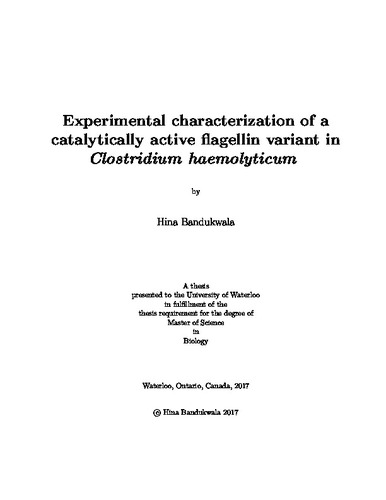 The bacterial flagellum is made up of approximately 20,000 subunits of the monomeric protein, flagellin, and plays a role in cell motility and pathogenesis. The extreme sequence diversity within the hypervariable region of flagellin genes observed across phyla suggests hidden functional diversity. This thesis outlines the discovery of the first family of flagellin variants with proteolytic activity. A multi-faceted approach revealed a conserved HExxH motif within the hypervariable region (HVR) of these flagellin variants. The motif is characteristic of the Gluzincin family of thermolysin-like peptidases and was found to be conserved in 74 bacterial species spanning over 32 genera. Experimental validation began with the recombinant expression and purification of the HVR of the flagellin FliA(H) from the species Clostridium haemolyticum, an animal pathogen. An approach using mass spectrometry and proteomics revealed that the substrate specificity of this flagellin protease is similar to that of zinc-dependant matrix metallopeptidases (MMPs). Furthermore, peptide sequencing of harvested C.haemolyticum flagellar filaments revealed that the proteolytic flagellin was the second most dominant flagellin component and was also shown to have MMP-like protease activity. Considering the expanded functional repertoire of this organelle in the recent years, this flagellin-associated protease may play a role in chemotaxis, biofilm formation, adhesion and pathogenesis.