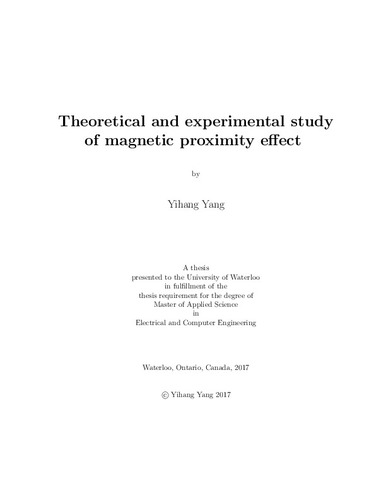 Magnetic proximity effect in a heterostructure, which consists of a semiconductor thin film or a 2D material sheet and a ferromagnetic insulator film, has a great potential in spintronics applications. However, a complete study of magnetic proximity effect has been highly challenging. We theoretically and experimentally investigate the proximity-induced exchange splitting in a semiconductor thin film or a 2D material sheet adjacent to a ferromagnetic insulator layer. Theoretical calculations indicate that proximity-induced exchange splitting can largely enhance the performance of spintronic applications. Photoluminescence experiment shows that the spin splitting in the semiconductor thin film induced by the proximity effect can be directly controlled by the magnetization of the ferromagnetic insulator layers. Such a sandwich structure not only serves as a platform to clarify the magnetic proximity effect at ferromagnetic insulator/semiconductor interfaces but also provides insights into designing spin-filter superlattices which can generate fully spin-polarized currents. The unit cell of the ferromagnetic superlattice is a ferromagnetic insulator/semiconductor bilayer. These ferromagnetic insulator layers create periodically arranged spin-dependent barriers, with semiconductor layers as quantum wells. In Chapter 2, we will cover the band structure of the ferromagnetic superlattice, and we will use standard approaches to study the electron transport together with spin transport in this superlattice. We will show that the translational symmetry along the superlattice growth direction ensures the wavevector a good quantum number, and the weak coupling between adjacent quantum wells leads to the formation of minibands (meV), which is far narrower than the bandwidth of conventional semiconductors (eV). The thickness of the bilayer unit cell determines the widths of minibands, and the spin dependent barriers lead to spin splitting minibands. In our study, we find that by carefully choosing the thickness of ferromagnetic insulator layers and semiconductor layers, the lowest spin degenerate miniband can split into two spin-resolved minibands. This half-metallic band structure makes possible the current through this superlattice 100\% spin-polarized. We will prove that in the so-called miniband conduction regime, the current in a superlattice with high crystal quality is indeed perfectly polarized under a small voltage bias. Because of the spin-dependent barriers in the superlattice, the induced half-metallic miniband paves a way to create a perfectly polarized spin current without an exponential increase of the device resistance, which can hardly be realized using a single spin-filter barrier. 2-dimensional (2D) materials are promising candidates to realize next generation devices for spintronic applications with low-power consumption and quantum operation capability. Magnetic proximity effect can induce an interface exchange field into 2D materials from the adjacent ferromagnetic insulator, which enables efficient spin modulation in 2D devices. In particular, Chapter 3 shows the graphene nanoribbon with armchair boundaries has the so-called Dirac cone and metallic band structure. Relativistic quasi-particles and weak spin-orbit coupling in graphene ensure a relatively long spin lifetime and also a long spin diffusion/relaxation length. A strong magnetic exchange field arises due to the interfacial coupling, which can be determined from Zeeman spin-Hall effect. Based on these properties of graphene, we propose a new type of spin field effect transistor (SpinFET) using a graphene nanoribbon with armchair boundaries as the conduction channel. By making use of the interfacial exchange field which derives from the direct coupling with ferromagnetic insulator gate and the quantum confinement effect, the control and manipulation of magnetization of the ferromagnetic insulator layer can modulate the Hamiltonian of the relativistic quasi-particles in the graphene nanoribbon, which controls the time evolution of electron spin and thus make efficient spin modulation feasible. Our numerical calculation shows that the spin lifetime and diffusion length are both long enough so that a phase difference of $\pi$ can be introduced within a time far below the spin lifetime. Thermal noise makes no influence on the current modulation due to the Dirac-like dispersion relation and the negligible spin-orbit coupling, which is crucial to realize large ON-OFF ratios.