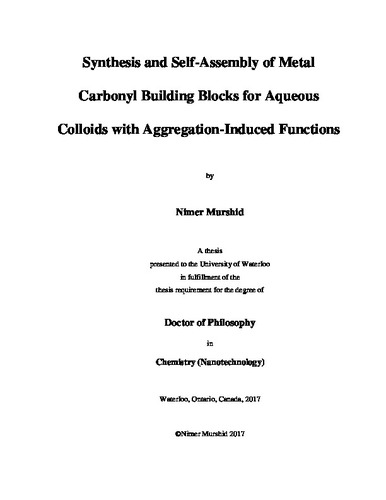 Metal carbonyl complexes (MCCs) are potentially useful for a range of biomedical applications, including cell imaging and bioassay. However, the poor solubility and stability of MCCs in water remain obstacles to their use in these applications. This thesis addresses this challenge via an investigation of the self-assembly behaviour of hydrophobic Fp (Fp: CpFe(CO)2) or Mp (Mp: CpMo(CO)3) acyl derivatives in water. Hydration of these hydrophobic molecules results in aqueous colloids with aggregation induced functions. The Fp and Mp acyl derivatives, used in this research, synthesized by the migration insertion reaction (MIR) of Fp and Mp alkyl compounds in the presence of phosphine ligands, e.g. triphenylphosphine (PPh3), possessed a highly polarized acyl CO group. This group was readily hydrated via water-carbonyl interactions (WCIs) during the aggregation of the molecules in water. This aggregation, driven by hydrophobic forces, resulted in highly integrated metal carbonyl vesicles (MCsomes) with liposome-like bilayer membranes. The polarized CO groups associated on the surface of the colloid created a strong local electric field, which induced an aggregation-enhanced IR absorption (AEIRA). When the colloids were exposed to a focused continuous-wave near-IR (NIR) laser beam, a strong gradient (trapping) force was generated, allowing laser-trapping of the MCsome. This strong force resulted from the sharp contrast in the refractive index (RI) between the building blocks (RI = ca. 1.8) and water (RI = 1.33). Blue-light–emitting MCsomes were created via the synthesis and self-assembly of a bithiophene tethered Fp acyl derivative. The bithiophene groups, associated within the membrane, generated an aggregation-induced emission (AIE). The separation of the bithiophene group from the metal carbonyl group, by an alkyl spacer, prevented AIE being quenched by the iron elements. The AEIRA, AIE and laser manipulation render the MCsomes potentially useful for vibrational and photoluminescent sensing applications. In addition, the redox activity of the iron on the surface of the colloids in water was explored. Cyclic voltammetry (CV) results showed two oxidation peaks separated by a redox coupling (ΔE½). The value of ΔE½ is inversely related to the separation distance between the adjacent Fp units located at the surfaces of the colloids, and was used to probe the degree of hydration of the hydrophobic domain. Taking advantage of this redox behaviour, the contribution of hydrophobic hydration to the formation and stabilization of the colloids, assembled from Fp acyl derivatives including hydrophobic and amphiphilic molecules, was systematically investigated. The results indicate that the hydrophobic interaction and hydration are significantly important for colloidal stability. In conclusion, a novel group of vesicles, MCsome, with multiple functions has been created via the aqueous self-assembly of Fp or Mp acyl derivatives. Hydrophobic hydration and interaction are crucial forces for the formation and stabilization of the colloids.