Claiming the Sky; Rethinking High-Rise Development in the City of Toronto 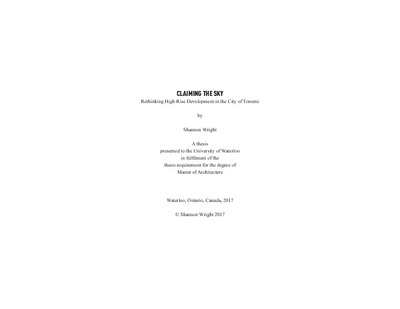 Toronto is following the footsteps of populated urban cities like New York through the extrusion of skyscrapers, transforming Toronto into one of the densest cities in North America. Rapid development of residential density has produced a mono-centric core in which density is favoured over sustainable social neighbourhoods. This “gold rush” of condominium development has superseded the production of public amenity infrastructure to support the density added. Limited vacant lands, coupled with rising housing prices and the ever-increasing population, points to a potential crisis in which the long-term sustainability of these towers is questioned. Towers within the core can no longer afford to maintain the existing inflexible mono-culture, but must include public amenity infrastructure which supports the rapid density and diverse populous. The presence of the tower, soaring far beyond the ground plain, has further amplified the social and physical disconnect of the cities fabric and its inhabitants, while removing the responsibility from developers taking advantage of these trends. This thesis aims to investigate the production of tower “neighbourhoods” through the hybridization of vertical public and private spaces. The proposal aims to question the current high rise trends and limited public amenity infrastructure within the city and provide an alternative model for porous vertical neighbourhoods in which public amenity infrastructure is used to achieve social sustainability within Toronto’s core.