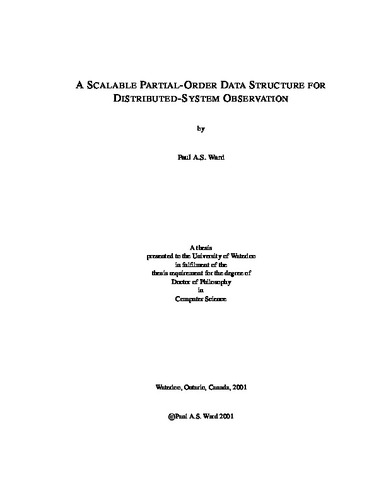 Distributed-system observation is foundational to understanding and controlling distributed computations. Existing tools for distributed-system observation are constrained in the size of computation that they can observe by three fundamental problems. They lack scalable information collection, scalable data-structures for storing and querying the information collected, and scalable information-abstraction schemes. This dissertation addresses the second of these problems. Two core problems were identified in providing a scalable data structure. First, in spite of the existence of several distributed-system-observation tools, the requirements of such a structure were not well-defined. Rather, current tools appear to be built on the basis of events as the core data structure. Events were assigned logical timestamps, typically Fidge/Mattern, as needed to capture causality. Algorithms then took advantage of additional properties of these timestamps that are not explicit in the formal semantics. This dissertation defines the data-structure interface precisely, and goes some way toward reworking algorithms in terms of that interface. The second problem is providing an efficient, scalable implementation for the defined data structure. The key issue in solving this is to provide a scalable precedence-test operation. Current tools use the Fidge/Mattern timestamp for this. While this provides a constant-time test, it requires space per event equal to the number of processes. As the number of processes increases, the space consumption becomes sufficient to affect the precedence-test time because of caching effects. It also becomes problematic when the timestamps need to be copied between processes or written to a file. Worse, existing theory suggested that the space-consumption requirement of Fidge/Mattern timestamps was optimal. In this dissertation we present two alternate timestamp algorithms that require substantially less space than does the Fidge/Mattern algorithm.