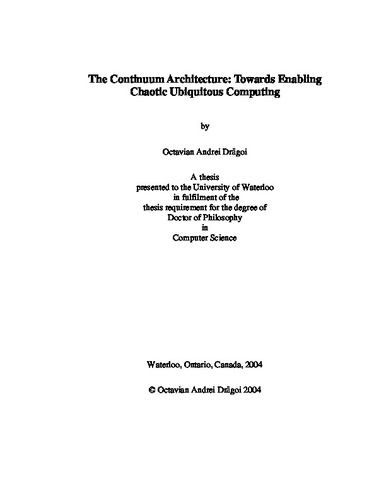 Interactions in the style of the ubiquitous computing paradigm are possible today, but only in handcrafted environments within one administrative and technological realm. This thesis describes an architecture (called Continuum), a design that realises the architecture, and a proof-of-concept implementation that brings ubiquitous computing to chaotic environments. Essentially, Continuum enables an ecology at the edge of the network, between users, competing service providers from overlapping administrative domains, competing internet service providers, content providers, and software developers that want to add value to the user experience. Continuum makes the ubiquitous computing functionality orthogonal to other application logic. Existing web applications are augmented for ubiquitous computing with functionality that is dynamically compiled and injected by a middleware proxy into the web pages requested by a web browser at the user?s mobile device. This enables adaptability to environment variability, manageability without user involvement, and expansibility without changes to the mobile. The middleware manipulates self-contained software units with precise functionality (called <i>frames</i>), which help the user interact with contextual services in conjunction with the data to which they are attached. The middleware and frame design explicitly incorporates the possibility of discrepancies between the assumptions of ubiquitous-computing software developers and field realities: multiple administrative domains, unavailable service, unavailable software, and missing contextual information. A framework for discovery and authorisation addresses the chaos inherent to the paradigm through the notion of <i>role assertions</i> acquired dynamically by the user. Each assertion represents service access credentials and contains bootstrapping points for service discovery on behalf of the holding user. A proof-of-concept prototype validates the design, and implements several frames that demonstrate general functionality, including driving discovery queries over multiple service discovery protocols and making equivalences between service types, across discovery protocols.