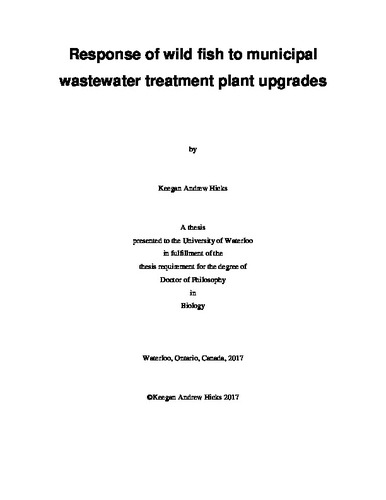 Impacts on aquatic biota residing near municipal wastewater treatment plant (MWWTP) outfalls have been documented globally. These impacts may be directly or indirectly associated with elevated contaminants such as nutrients, metals, suspended solids (SS), biochemical oxygen demanding matter (BOD), pharmaceuticals, and personal care products. A variety of effects have been well documented in the Grand River watershed of southern Ontario below the outfalls of the MWWTPs of the cities of Kitchener and Waterloo. Responses in wild fish have been reported at multiple levels of biological organization, ranging from altered gene expression to changes in fish communities, as well as changes in nutrient cycling within the aquatic food web. The most consistently observed effect has been high occurrences and severe cases of intersex (ova-testes) in the male rainbow darter (Etheostoma Caeruleum); this finding represents one of the worst examples of pollution-caused intersex reported anywhere in the world. Primarily in response to the introduction of new effluent quality standards, the Region of Waterloo has invested millions of dollars to upgrade several of its MWWTPs including the facility servicing Kitchener, creating a unique opportunity to conduct a before-and-after study. The main objective of this thesis was to assess if treatment upgrades, which were targeted at conventional contaminants (i.e., ammonia, BOD, SS, and chloride), effectively remediated the responses previously reported in wild fish downstream of the MWWTP. To test this, historical, archived, and new data collections were used to assess changes at multiple levels of biological organization, including changes in nutrient cycling in the aquatic food web, reproductive effects in the male rainbow darter (e.g., intersex), and changes in fish community composition. For comparative purposes, responses in rainbow darter were also examined at numerous reference sites and below the smaller Waterloo MWWTP, which did not undergo any major upgrades during the study period. The treatment upgrades at the Kitchener MWWTP (which included nitrifying activated sludge) improved the overall quality of the effluent; these improvements included reductions in nutrients (total ammonia), pharmaceuticals, and total estrogenicity (E2eq). In contrast, the Waterloo MWWTP had deteriorating effluent quality, with ammonia levels increasing over the course of the study. Changes in effluent quality at both the Kitchener and Waterloo MWWTPs were detected in the downstream aquatic food webs using stable isotope ratios (δ15N and δ13C). Patterns of δ15N in a primary consumer (benthic invertebrate) and a secondary consumer (rainbow darter) reflected the exposure to MWWTP effluents and changes in nutrient cycling in response to the changing effluent quality. A major reduction in intersex in the male rainbow darter below the Kitchener MWWTP outfall was also associated with the improvements in effluent quality. Rates of intersex were reduced by as much as 70% in the first year post-upgrade and dropped to near background levels within three years. Detecting change in fish communities below MWWTP outfalls (including before and after the upgrades) was more challenging. While subtle changes were detected (e.g., increases in pollution-tolerant species below the MWWTP outfalls), these could not be directly associated with MWWTP effluents because they were confounded by a watershed gradient (e.g., stream size). Fish communities were highly variable both spatially and temporally, limiting our ability to associate changes with local environmental conditions (i.e., effects of MWWTP outfalls). Although rainbow darter has been used as a sentinel species for detecting impacts of MWWTP effluents in many studies, little is known about its movement patterns. Elevated intersex was observed historically at the near-field upstream site of the Kitchener MWWTP outfall, leading to a hypothesis that wastewater-exposed fish may be moving upstream. To inform the interpretation of responses in rainbow darter as a sentinel species, a mark-and-recapture study was conducted at an upstream reference site to better understand their movement. Although the majority of fish (85%) had high site fidelity, a small proportion of fish moved considerable distances (up to 975 m). This study confirmed that there is potential for some fish to move and thereby confound the interpretation of near-field upstream sites that are not physically separated from the sites below the MWWTP outfall. The decline in intersex in rainbow darter after the upgrades at the site immediately upstream of the Kitchener outfall supports the view that at least some of the responses seen at this site were probably associated with fish movements. Overall, this thesis advances our understanding of the impacts of MWWTP effluents on wild fish and their response to improved effluent quality (i.e., treatment). The relatively simple (conventional) upgrades at the Kitchener MWWTP resulted in improvements in the aquatic receiving environment, indicating that more advanced treatment may not be required to address these effects of concern. However, other impacts may be occurring that were not measured in this study. The results drawn from this thesis may have implications for future wastewater management strategies for other MWWTPs across Canada and around the globe. In addition, these studies may provide insight into key biological endpoints that could be useful for future biomonitoring programs for MWWTP effluents.