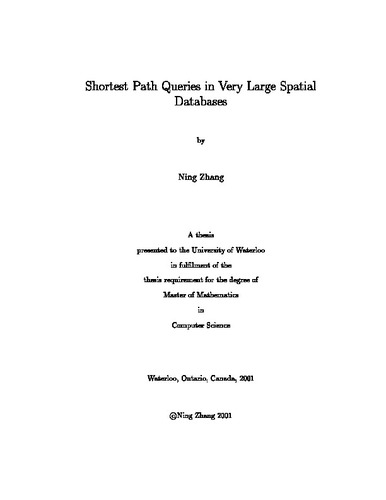 Finding the shortest paths in a graph has been studied for a long time, and there are many main memory based algorithms dealing with this problem. Among these, Dijkstra's shortest path algorithm is one of the most commonly used efficient algorithms to the non-negative graphs. Even more efficient algorithms have been developed recently for graphs with particular properties such as the weights of edges fall into a range of integer. All of the mentioned algorithms require the graph totally reside in the main memory. Howevery, for very large graphs, such as the digital maps managed by Geographic Information Systems (GIS), the requirement cannot be satisfied in most cases, so the algorithms mentioned above are not appropriate. My objective in this thesis is to design and evaluate the performance of external memory (disk-based) shortest path algorithms and data structures to solve the shortest path problem in very large digital maps. In particular the following questions are studied:What have other researchers done on the shortest path queries in very large digital maps?What could be improved on the previous works? How efficient are our new shortest paths algorithms on the digital maps, and what factors affect the efficiency? What can be done based on the algorithm? In this thesis, we give a disk-based Dijkstra's-like algorithm to answer shortest path queries based on pre-processing information. Experiments based on our Java implementation are given to show what factors affect the running time of our algorithms.