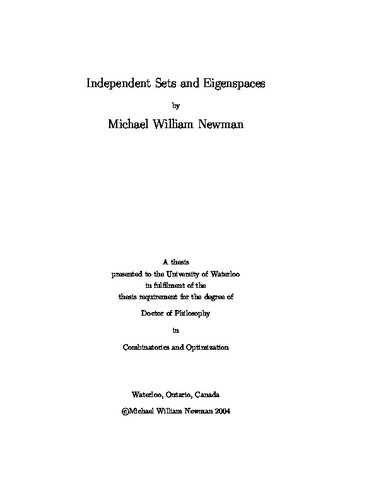 The problems we study in this thesis arise in computer science, extremal set theory and quantum computing. The first common feature of these problems is that each can be reduced to characterizing the independent sets of maximum size in a suitable graph. A second common feature is that the size of these independent sets meets an eigenvalue bound due to Delsarte and Hoffman. Thirdly, the graphs that arise belong to association schemes that have already been studied in other contexts. Our first problem involves covering arrays on graphs, which arises in computer science. The goal is to find a smallest covering array on a given graph <i>G</i>. It is known that this is equivalent to determining whether <i>G</i> has a homomorphism into a <i>covering array graph</i>, <i>CAG(n,g)</i>. Thus our question: Are covering array graphs cores? A covering array graph has as vertex set the partitions of <i>{1,. . . ,n}</i> into <i>g</i> cells each of size at least <i>g</i>, with two vertices being adjacent if their meet has size <i>g<sup>2</sup></i>. We determine that <i>CAG(9,3)</i> is a core. We also determine some partial results on the family of graphs <i>CAG(g<sup>2</sup>,g)</i>. The key to our method is characterizing the independent sets that meet the Delsarte-Hoffman bound---we call these sets <i>ratio-tight</i>. It turns out that <i>CAG(9,3)</i> sits inside an association scheme, which will be useful but apparently not essential. We then turn our attention to our next problem: the Erdos-Ko-Rado theorem and its <i>q</i>-analogue. We are motivated by a desire to find a unifying proof that will cover both versions. The EKR theorem gives the maximum number of pairwise disjoint <i>k</i>-sets of a fixed <i>v</i>-set, and characterizes the extremal cases. Its <i>q</i>-analogue does the same for <i>k</i>-dimensional subspaces of a fixed <i>v</i>-dimensional space over <i>GF(q)</i>. We find that the methods we developed for covering array graphs apply to the EKR theorem. Moreover, unlike most other proofs of EKR, our argument applies equally well to the <i>q</i>-analogue. We provide a proof of the characterization of the extremal cases for the <i>q</i>-analogue when <i>v=2k</i>; no such proof has appeared before. Again, the graphs we consider sit inside of well-known association schemes; this time the schemes play a more central role. Finally, we deal with the problem in quantum computing. There are tasks that can be performed using quantum entanglement yet apparently are beyond the reach of methods using classical physics only. One particular task can be solved classically if and only if the graph &Omega;(<i>n</i>) has chromatic number <i>n</i>. The graph &Omega;(<i>n</i>) has as vertex set the set of all <i>± 1</i> vectors of length <i>n</i>, with two vertices adjacent if they are orthogonal. We find that <i>n</i> is a trivial upper bound on the chromatic number, and that this bound holds with equality if and only if the Delsarte-Hoffman bound on independent sets does too. We are thus led to characterize the ratio-tight independent sets. We are then able to leverage our result using a recursive argument to show that <i>&chi;</i>(&Omega;(<i>n</i>)) > <i>n</i> for all <i>n</i> > 8. It is notable that the reduction to independent sets, the characterization of ratio-tight sets, and the recursive argument all follow from different proofs of the Delsarte-Hoffman bound. Furthermore, &Omega;(<i>n</i>) also sits inside a well-known association scheme, which again plays a central role in our approach.