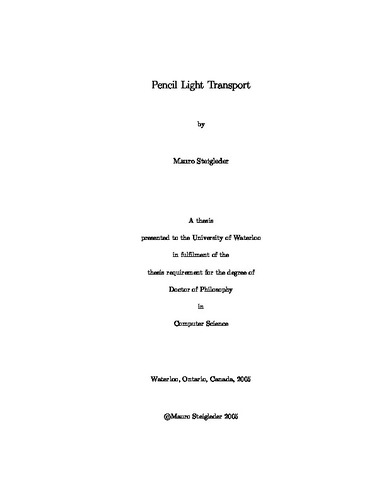 Global illumination is an important area of computer graphics, having direct applications in architectural visualization, lighting design and entertainment. Indirect illumination effects such as soft shadows, color bleeding, caustics and glossy reflections provide essential visual information about the interaction of different regions of the environment. Global illumination is a research area that deals with these illumination effects. Interactivity is also a desirable feature for many computer graphics applications, especially with unrestricted manipulation of the environment and lighting conditions. However, the design of methods that can handle both unrestricted interactivity and global illumination effects on environments of reasonable complexity is still an open challenge. <br /><br /> We present a new formulation of the light transport equation, called <em>pencil light transport</em>, that makes progress towards this goal by exploiting graphics hardware rendering features. The proposed method performs the transport of radiance over a scene using sets of pencils. A pencil object consists of a center of projection and some associated directional data. We show that performing the radiance transport using pencils is suitable for implementation on current graphics hardware. The new algorithm exploits optimized operations available in the graphics hardware architecture, such as pinhole camera rendering of opaque triangles and texture mapping. We show how the light transport equation can be reformulated as a sequence of light transports between pencils and define a new light transport operator, called the <em>pencil light transport operator</em>, that is used to transfer radiance between sets of pencils.