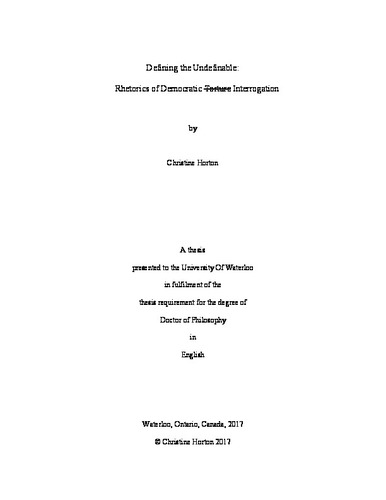 Over the past decade and a half, public debate on the issue of torture has increased dramatically, with legal, political, and cultural discourses offering many, often conflicting, perspectives on the meaning and function of torture in contemporary democracy. This dissertation investigates the influence of audience beliefs, values, and attitudes in shaping both social and formal definitions of torture. Rhetoricians have often understood public knowledge of torture by assessing the positions either advocating or condemning its use. I argue that the relationship between representation and audience interpretation is more dynamic, and can be better understood by applying a rhetorical analysis to definitions of torture to demonstrate how the engagement of multiple meanings can construct new interpretations. My dissertation builds on existing research by analyzing the meaning-making function of audience interpretation and using it to critique representations of torture in a series of artefacts: torture in the Athenian orators, legal definitions of torture in the U.S. “Torture Memos,” popular television and film, the technique “acoustic bombardment,” the first-person narrative of Guantánamo detainee Mohamedou Ould Slahi, and Banksy’s guerilla art. In each of these examples, I argue that a rhetorical understanding of definition reveals the dynamics of the formation of social knowledge about torture. I conclude with a discussion of the biopolitical implications of contemporary torture, applying rhetorical definition to the articulation of a common human vulnerability. If the best defense against torture is an community who refuses to accept its practice, then a better understanding of how audiences define and interpret torture is needed to prevent its continued practice.