Experiences at Lollapalooza: Theorizing About Belonging, Group Norms, and the Role of the Trickster in Liminal Community Space 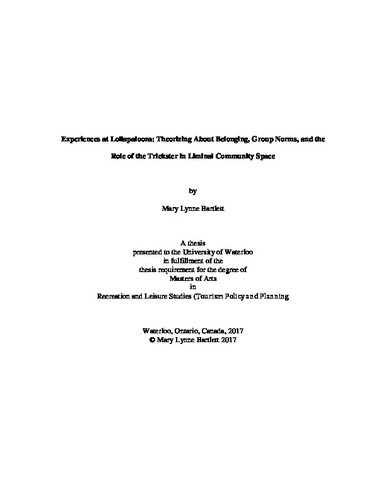 Literature written on music festivals focuses on motivations, crowds, drug use, and marketing. This study tried to understand the experiences of music festival participants at a large scale international music festival. Lollapalooza 2012 was chosen as the site for this study. Using an interpretive approach the study sought to explore experiences at festivals, community, sense of self, and liminality. The following three research questions were explored using interpretive grounded theory methodology: How is self experienced at the music festival? How is liminal space experienced at the music festival? How is sense of community experienced at a music festival? Data collected included observation notes collected in the field during the 2012 festival, interview questions emailed to study participants after the festival, and postings on the Lollapalooza Facebook page and Lollapalooza message board forum. Themes in Chapter Four described: Movements and Expression - Norming Space at Performances, Moments and Movements Induced by Weather, Connections and Communication at Lolla, Social Spaces within Lolla, Being in Another World?, and Life After Lollapalooza - Holding on to Belonging in Memories of Being at the Festival. Festival participants also engaged in an ongoing negotiations of connection through shared symbols, a set of rules communicated within the social space which also connected to the creation of disconnection and enclaves at Lollapalooza. Lollapalooza had its own complex set of rules and customs created by state laws, policies and procedures set forth by festival organizers, and festival participants, but also subverted by the trickster. In response to the research questions, study findings suggest festival participants were able to enter in and out of the liminal state through ongoing negotiations with the trickster during the festival.

Mary Lynne Bartlett (2017). Experiences at Lollapalooza: Theorizing About Belonging, Group Norms, and the Role of the Trickster in Liminal Community Space. UWSpace. http://hdl.handle.net/10012/11411