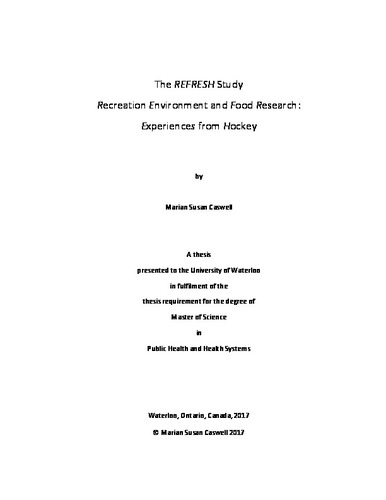 Introduction Unhealthy dietary behaviours are prevalent among adolescents who participate in organized sports. This may be putting them at risk of obesity and chronic disease, since adolescent eating behaviours have been shown to track into adulthood. This might relate, in part, to obesogenic recreation facility food environments. Evidence clearly shows that in Canada recreation facilities represent unhealthy food environments. Participation in organized hockey places adolescents within the recreation food environment on a regular basis. The purpose of this phenomenological study was to explore the adolescent hockey player experience with the broad social and physical environment associated with playing hockey. Parent perspectives of players’ food experiences were also explored. Methods Hockey players (n=24) aged 12-15 years were recruited from five Ontario leagues to describe their food experiences in relation to hockey using photovoice, a qualitative participatory action approach. Participants took photographs illustrating their experiences making food choices around participation in recreational hockey. Using semi-structured interviews, participants interpreted their perceptions, as illustrated in the photographs. Photographs best representing their experience were chosen and shared anonymously in two participant focus group discussions. Group discussions followed the SHOWeD method with the questions: what is Seen, what is really Happening, how this relates to Our (participant’s) lives, Why the situation exists, and what can be Done about it. A selection of exemplar photographs were chosen for a photo exhibit to stakeholders and as the foundation for interviews with parents. Parents of eligible hockey players were interviewed using semi-structured interviews to gain their insight into the experiences illustrated. Interviews and the group discussions were audio-recorded and transcribed verbatim. Thematic analysis of the transcripts was facilitated using NVivo 11 (QSR) software. Results Both players and parents perceived recreational facility food options as unhealthy and identified that travel and time constraints contributed to less healthy choices. Dominant influences among players included: the perceived importance of nutrients (i.e., protein) of foods (i.e., chocolate milk) for performance and recovery; branding and media (i.e., the pro-hockey aura of Tim Horton’s®; social aspects of tournament and team meals; and moral values around ‘right’ and ‘wrong’ food choices. Players perceived recreation facility food offerings as mainly intended for spectators, not players. Conclusions Results indicate recreation facilities are only one of a range of environments that influence the eating behaviour of adolescent hockey players. Both the hockey players and their parents perceive Ontario recreation facilities to be unhealthy food environments. Indeed young hockey players, particularly those who had received nutrition education, were highly motivated by perceived benefits of healthy eating on performance and reported that they did not generally make food purchases at recreation facilities. Recreation food facility management and vendors may be missing a significant opportunity through not providing the healthy food options players’ value. The players embraced heathy eating choices when associated with performance demonstrating that adolescents will internalize information if associated with something of value. The players perceptions around brand and product marketing demonstrates the susceptibility of adolescents to advertising and that it can be used to support perceived healthy eating. Parents, coaches, and others involved in educating hockey players can use this to influence healthy behaviours. Implications This research contributes to our understanding of the comprehensive factors influencing adolescents’ dietary intake related to exposure to the recreational hockey environment. This understanding can help to inform policy and intervention strategies that support adolescent healthy eating behaviours, particularly in recreation centres where nutrition policy does not currently exist in Ontario.