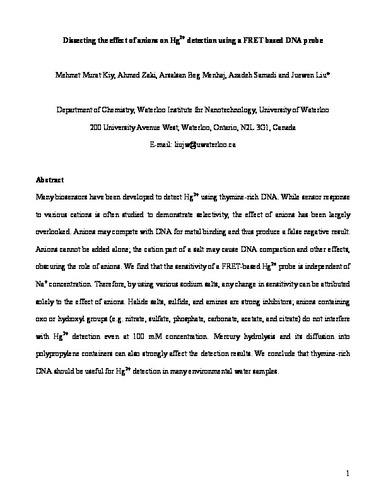 Many biosensors have been developed to detect Hg2+ using thymine-rich DNA. While sensor response to various cations is often studied to demonstrate selectivity, the effect of anions has been largely overlooked. Anions may compete with DNA for metal binding and thus produce a false negative result. Anions cannot be added alone; the cation part of a salt may cause DNA compaction and other effects, obscuring the role of anions. We find that the sensitivity of a FRET-based Hg2+ probe is independent of Na+ concentration. Therefore, by using various sodium salts, any change in sensitivity can be attributed solely to the effect of anions. Halide salts, sulfides, and amines are strong inhibitors; anions containing oxo or hydroxyl groups (e.g. nitrate, sulfate, phosphate, carbonate, acetate, and citrate) do not interfere with Hg2+ detection even at 100 mM concentration. Mercury hydrolysis and its diffusion into polypropylene containers can also strongly affect the detection results. We conclude that thymine-rich DNA should be useful for Hg2+ detection in many environmental water samples.