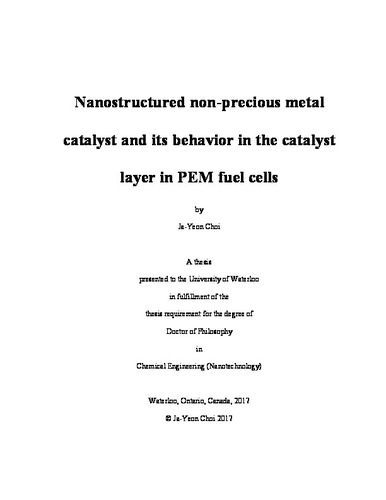 Polymer electrolyte membrane (PEM) fuel cells have been viewed as promising power source candidates for transport, stationary, and portable applications due to their high efficiency and low emissions. The platinum is the most commonly used catalyst material for the oxygen reduction reaction (ORR) at the cathode of PEM fuel cells; however, the limited abundance and high cost of platinum hinder the large-scale commercialization of fuel cells. Two approaches being widely accepted to overcome this limitation are 1) to improve Pt utilization to boost the activity while reducing the loading, or 2) to develop non-precious metal catalysts (NPMCs) with sufficient activity and stability to be used in the PEM fuel cells. Despite the ample amount of research and improvements, the activity and stability of these NPMCs must be further improved to be practical in PEMFC applications. The activity can be further enhanced by several different approaches including but not limited to: 1) use of different dopants (nitrogen, boron, sulfur, etc.) precursors, 2) use of different non-platinum group metals (Fe, Co, Mn), 3) utilizing high surface area support materials and 4) applying heat treatment in various conditions. The combination of these approaches affect the active site density and distribution, electronic structure of the active site thus affecting its kinetics and turn over frequency, electrical conductivity and stability of the catalyst in various ways. Herein, two chapters are included exploring with the above mentioned combinations to synthesize highly active and stable catalysts, followed by another chapter investigating its fuel cell performance and discussing possible causes of stability loss with a method to verify the issue with flooding of the microporous active sites. In the first study, non-precious metal oxygen reduction reaction (ORR) catalysts were prepared by pyrolyzing a carbon supported complex consisting of iron acetate coordinated with 1,2,4,5-tetracyanobenzene (TCNB) in an iron phtalocyanine-like polymer arrangement. By employing these small precusursor molecules, it is expected that more uniform and complete coverage of the carbon support material can be obtained, and by using the in situ formation and polymerization of FePc, effective iron-center segregation can be achieved. The results suggest that this type of catalyst has great potential used as a non-precious PEM fuel cell catalyst. In the second study, Co-N decorated porous graphene aerogel catalyst was synthesized as an efficient catalyst for ORR. In the preparation process, polyaniline (PANI) is introduced as a pore-forming agent to aid in the self-assemble of graphene species into a porous aerogel networks, and a nitrogen precursor to induce in situ nitrogen doping. Such highly desired structures can not only expose sufficient active sites for the ORR but also guarantee the fast mass transfer in the catalytic process, which provides significant catalytic activity with positive onset and half wave potentials, low hydrogen peroxide yield and remarkable stability in acid medium. In the last chapter, with a highly microporous catalyst made with dual nitrogen precursors (phenanthroline and polyaniline), a systematic study is performed to investigate micropore flooding in-situ before and after stability testing. The results do not support micropore flooding as being a large contributor to instability, at least for the family of NPMCs evaluated in this work. The protocol outlined here can be used by other researchers in the NPMC community to diagnose micropore flooding in their own respective catalysts. Several recommendations for future work were suggested in the last section of this work to further apply the knowledge to design a highly active, durable, and low-cost NPMCs.