Chemical characterization of construction materials and solute transport in peat from the Nikanotee Fen watershed at the Athabasca oil sands region, Alberta, Canada 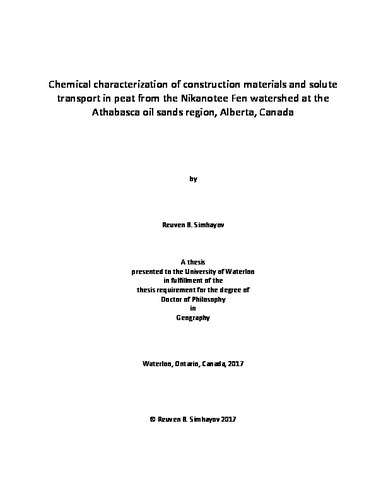 Overburden and tailings materials from oil sands production were used as construction materials as part of a novel attempt to create a self-sustaining, peat accumulating fen-upland ecosystem. To evaluate the potential for elemental release from the construction materials, total elemental concentrations in the tailings sand, petroleum coke and peat used to construct a fen ecosystem were determined using microwave-assisted acid digestions and compared to a leaching experiment conducted under environmentally-relevant conditions. A comparison of solid phase to aqueous Na, Ca, S and Mg concentrations showed they were highly leachable in the materials. Given that the concentrations of these elements can affect plant community structure, it is important to understand their leachability and mobility as they migrate between materials used to construct the system. To that end, a mass balance of aqueous Na, Ca, S and Mg was conducted based on leaching experiments and materials analysis coupled with existing data from the constructed system. The data indicate that there is a large pool of leachable Na, Ca, S and Mg in the system, estimated at 27 t of Na, 13.5 t of Ca, 37.3 t of S and 8.8 t of Mg. Since recharge mainly drives the fen-upland system water regime, and discharge in the fen, evapo-accumulation of these solutes on the surface may occur. Petroleum coke and tailing sands contain metals which raises concern about leaching to the water. A quantification of metals in the 3 main materials used to construct the fen and their potential of leaching was measured using a leaching experiment and solid digestion. The leaching experiment results indicated that only Manganese (Mn) was readily leachable in the petroleum coke. To contrast the findings with the field setting, samples were collected from the Nikanotee Fen watershed, analyzed and compared to water quality guidelines. The comparison indicated that only Mn was present in the leached solution in concentrations above the 825 µg/l guideline with 3743±651 µg/l in coke and 1110±253 µg/l in peat. Based on SEM and sulfur (S) aqueous data from leaching experiments and field sampling it was concluded that under the slight alkaline pH (8.22±0.06) and anaerobic conditions and the clogged structure of the coke, the leaching is low for analyzed metals (Ti, V, Ni, Pb, Mn, Cu, Zn, U and Cd) except for Mn. Furthermore, high aqueous S concentration would act as a control for leached metal ions. Therefore, under the slight alkaline, anaerobic conditions present in the Nikanotee Fen watershed, there is a low risk of metals contamination resulting from the incorporation of coke in the constructed system. Finally, the leachable solutes found are mainly located in the upland and are expected to be transported to the base of the fen, given the design and existing hydraulic gradients. For a better understanding and prediction of the transport rates and solute accumulation in the rooting zone of the fen, numerical models are needed. To determine the underlying transport processes in peat from the Nikanotee Fen watershed, soil hydraulic properties were measured and saturated and unsaturated solute breakthrough experiments were performed using Na+ and Cl- as reactive and non-reactive solutes, respectively. Inverse modeling and robust statistical evaluation indicated that the soil hydraulic properties and saturated solute breakthrough show that the unimodal van Genuchten-Mualem model (unimodal) described the results well using the Convection Dispersion Equation alone. Parameterization using a mobile-immobile physical non-equilibrium model (MIM) resulted in saturated hydraulic conductivity (454 cm/d) much higher than the measured value (100 cm/d); the unimodal approach produced a value of 106 cm/d. Furthermore, the MIM inverse fit required two additional parameters, one with high uncertainty. The very high Damkohler number (→infinity) indicating instantaneous equilibration between mobile and immobile phases underscores the redundancy of the MIM approach for this particular peat, which is degraded sufficiently that cell-walls have disintegrated. Thus, while physical non-equilibrium of the MIM approach was unnecessary, chemical non-equilibrium for Na+ breakthrough occurred, and could be modeled with the one site adsorption model. The parameters were used to predict the Cl- and Na+ rise in a lab based unsaturated steady state evaporation experiment using HYDRUS-1D. The simulation showed a good fit to observations, confirming the suitability of the parameters for use in a slightly unsaturated transport simulation. The findings improve the understanding of solute redistribution in the Nikanotee Fen watershed.