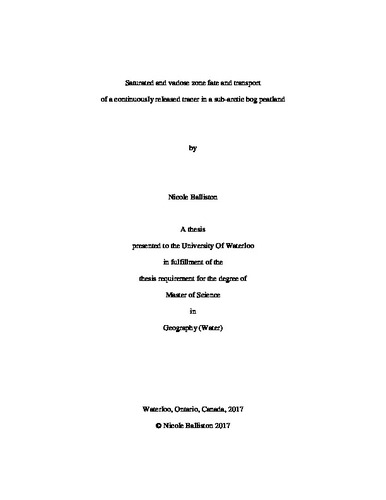 In Ontario’s James Bay Lowland, sub-arctic bog and fen peatlands make up 90% of the landscape. Increasing resource extraction operations in this area pose a risk of contaminant release into these systems, both intentional (i.e. high nitrogen/ sulphate/ phosphate wastewater outputs) and unintentional (i.e. crude oil pipeline leakages, fuel carrying train derailments, etc.). Once released, there is potential for solute migration and accumulation through both saturated and unsaturated transport processes. Further, capillary action has the potential to mobilize contaminants upwards towards the non- vascular mosses which dominate the surface. The limited existing field and laboratory studies have only provided preliminary information on fate and transport of dissolved solute, and no field studies have considered the potential accumulation of solute above the water table in a bog peatland. In the event of a release, a thorough understanding of solute fate and transport within the saturated and unsaturated (vadose) zones is necessary to predict the fate of the plume and the potential impacts on peatland ecosystems. To better understand contaminant transport in these systems, approximately 14 000 L/day of sodium chloride (300 mg/L) was released into a bog in the James Bay Lowland. The tracer was pumped into a fully penetrating well (1.5 m below ground surface (bgs)) over a 45 day period in 2015 between July 5 and August 18. Plume development was measured in the saturated zone via in situ specific conductance (SC), temperature, and water table depth from a well and piezometer monitoring network. Specific conductance measurements were collected in the unsaturated zone using Time Domain Reflectrometry (TDR) sensors installed at 5, 10, and 15 depths (cm bgs). Meteorological data were collected from nearby weather stations for the duration of the spill. Following the spill, four 30 cm long cores were extracted from the site. An unsaturated breakthrough experiment was conducted for 60 days in a laboratory setting using a 300 mg/L sodium chloride solution, to verify processes observed in the field. Depth dependent soil parameterization was completed on each core following this experiment to determine the influence of inter core heterogeneity on unsaturated solute distribution. In the saturated zone, over the spill period the bulk of the plume travelled a lateral distance of 100 m in the direction of a slight water table gradient (0.004 m/m). The plume shape was irregular and indicative of preferential flow paths formed by interconnected hollows in the landscape. Saturated transport of the tracer occurred primarily within the 25 cm piezometers (corresponding to the acrotelm). A discontinuous second high hydraulic conductivity layer at ~125 cm bgs also experienced rapid solute advection. Transport was confounded by a large amount of precipitation (233 mm total over the study period), which enhanced lateral dispersion, and diluted the tracer in the highly conductive upper peat layer. Solute also showed the potential to accumulate and remain in lower hydraulic conductivity hummocks adjacent to flow paths, and potentially within closed pores in the peat matrix. These results highlight the complexity of fate and transport in bog peatlands, and the susceptibility of the systems in a real-world spill scenario as detailed knowledge about depositional environment, meteorological conditions, topography, water table gradient and contaminant specific behaviour are required for accurate plume assessment. Field scale characterization of the vadose zone showed a strong dependence of unsaturated solute accumulation on hydrological conditions. In particular, elevated water table conditions increased connectivity between unsaturated hummocks and the saturated zone, greatly accelerating the rate of solute accumulation. Heterogeneity in soil structure increased the complexity of this relation, as less dense soil transmitted solute well under high water contents but did not retain the solute in low water content conditions. Denser soil experienced solute accumulation at a slower place but had a greater water and solute retention capacity, better facilitating capillary rise and long term accumulation. In laboratory conditions inter core heterogeneity played a great role in solute accumulation. Rates of evaporation differed between cores; highest evaporative rates and upward solute mobility were noted in a core with a highly porous upper 5 cm underlain by dense peat, which supplied solute and retained water well above the water table. The results of this study highlight the importance of extracting samples representative of site conditions due to a large amount of inter-core heterogeneity. Further development of these concepts is recommended through the use of 2D unsaturated zone modelling.