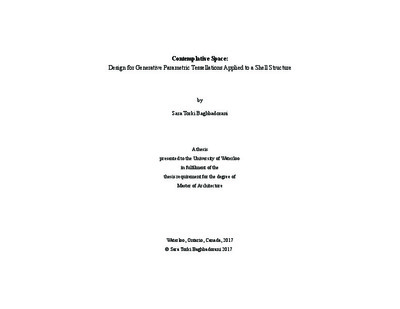 This thesis focuses on surface articulation of a shell structure constructed through a generative, parametric, modular design process. The shell form uses vault topology that adapts to varying site conditions such as topography and shape and that serves as contemplative space. Contemplative and aesthetic qualities have been achieved by analyzing aspects of spatial vernacular muqarnas and emulating aspects of their geometry within new surface ornament. By abstracting muqarnas, and exploring aniconic character informed by both vernacular precedent and contemporary parametric design methods, the design offers a specialized new interpretation of this historical type of ornament. The design proposes an expandable master system. Two strategies based on this system are illustrated, both organized with similar components: columns (load-bearing modules) and bridges (modules for covering spans). Different behaviours are exhibited: first, symmetrical and homogeneous form and, second, non-symmetrical and heterogeneous form. The second layer of this complex system uses the topology of a vault system. A decoration system proposed for articulating interior-oriented surfaces is based on algorithmic geometry. This system offers two different characters, first inspired by muqarnas as a specific vernacular ornament, primarily from traditional Persian architecture, and second as a non-cultural, neutral ornament originating from computational design and achieved by deformation of mesh division. Software tool use is illustrated, demonstrating how scripted Grasshopper software components hosting custom C# code passages are used within a multi-layer design process. Research informing this design focuses on historical and contemporary architecture. Contemporary precedents, “Arabesque Wall,” by Benjamin Dillenburger and Michael Hansmeyer, and “La Voûte de LeFevre” by Brandon Clifford and Wes McGee are described. An analysis of these precedents explores how emerging digital technologies informed by history, can create a new design ecology and culture. Additional discussion considers cultural and phenomenological observations and aesthetics of the design in its physical and psychological aspects, considered in contexts that range from topology of the form to visual perception of the internal “contemplative space.” This investigation indicates points of contact between arabesque art as vernacular ornament and contemporary, computer-based art. Computational and parametric design is considered with regards to its effect on contemporary design culture. Parametric strategies, software, and C# coding used in the thesis are illustrated. The spatial ornament known as muqarnas is analyzed as one example of algorithmic ornament, illustrated through a contemporary “art of the knot” designed using parametric tools. In the last part of the research, features of the vault system are demonstrated historically and through individual examples of each kind. In parallel, contemporary shell structure and form optimization by means of computational simulation and morphogenesis are investigated. The parametric system developed in the thesis design provides an opportunity to design a complex geometrical system that can be applied to shell-like envelopes. Design studies included within the thesis feature free-standing shelters capable of hosting a variety of public or private activities. Emphasizing visual and decorative qualities, visualizations of the applied design system are developed and positioned within sites in different locations.