Understanding The Lived Experiences of Local Residents in Muskoka, Ontario: A Case Study on Cottaging 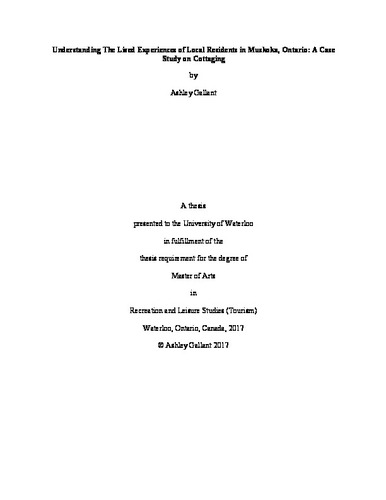 Muskoka, Ontario, Canada has been recognized as an environment that is appealing for tourism visitation, but more specially cottaging, due to its attractive natural landscape and amenities that are “normally associated with larger cities, while maintaining the lifestyle of a small community” (The District Municipality of Muskoka, 2014). Specifically, for four months of the year, 83, 203 seasonal residents outnumber their 59, 220 permanent counterparts, cultivating a variety of opportunities and challenges in the destination. This particular study, aims to look at tourism in Muskoka in regard to its enhancement of social, economic, and political assets in the destination, and how cottaging impacts the local community from the viewpoint of the permanent resident. Current issues and tensions that exist in Muskoka are drawn upon through secondary data analysis of media articles, government documents, opinion pieces, and 16 semi-structured interviews with local residents during the peak summer season, being July and August, of 2016. Through the methodological lens of critical theory, identifying binaries (Jaakson ,1986), the representation of place and place attachment (MacCannell, 1973; Buckley, 2005; Harrison, 2014), rural tourism advantages and disadvantages (Smith, 1989; Frederick, 1993; Marcouillier, 1997; Mitchell, 2013) and the environmental protection of amenity rich destinations (Jaakson, 1986; Buckley, 2005; Lagerqvist, 2014) are examined and discussed. Results from this study express that varying tensions exist in the destination around land use values, poverty, and class conflicts. However, a contrasting view also exists that acknowledges the economic importance of hosting such tourism in Muskoka, as well as the social benefits and positive influence of cottaging for the wellness for both local and visiting populations.