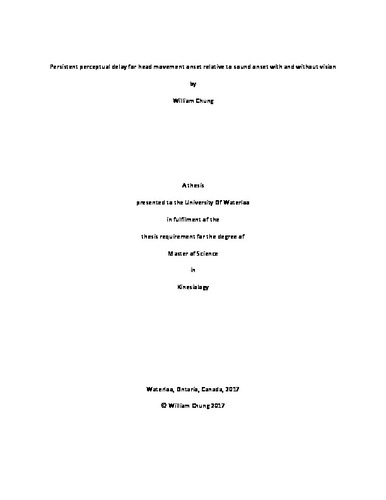 Knowing when the head moves is crucial information for the central nervous system in order to maintain a veridical representation of the self in the world for perception and action. Our head is constantly in motion during everyday activities, and thus the central nervous system is challenged with determining the relative timing of multisensory events that arise from active movement of the head. The vestibular system plays an important role in the detection of head motion as well as compensatory reflexive behaviours geared to stabilizing the self and the representation of the world. Although the transduction of vestibular signals is very fast, previous studies have found that the perceived onset of an active head movement is delayed when compared to other sensory stimuli such as sound, meaning that head movement onset has to precede a sound by approximately 80ms in order to be perceived as simultaneous. However, this past research has been conducted with participants’ eyes closed. Given that most natural head movements occur with input from the visual system, could perceptual delays in head movement onset be the result of removing visual input? In the current study, we set out to examine whether the inclusion of visual information affects the perceived timing of vestibular-auditory stimulus pairs. Participants performed a series of temporal order judgment tasks between their active head movement and an auditory tone presented at various stimulus onset asynchronies. Visual information was either absent (eyes-closed) or present while either maintaining fixation on an earth or head-fixed LED target in the dark or in the light. Our results show that head movement onset has to precede a sound with eyes-closed. The results also suggest that head movement onset must still precede a sound when fixating targets in the dark with a trend for the head having to move with less lead time with visual information and with the VOR active or suppressed. Together, these results suggest perception of head movement onset is persistently delayed and is not fully resolved with full field visual input.