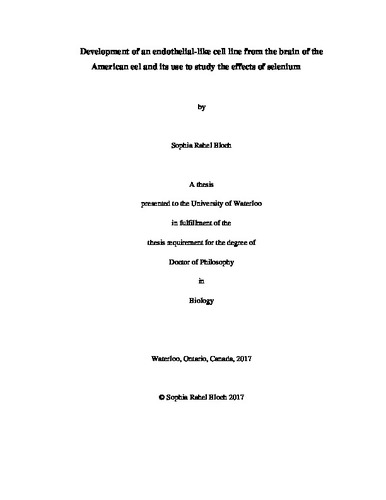 A cell line, eelB, has been developed in this thesis from the brain of the American eel, Anguilla rostrata (Lesueur), an endangered species and belonging to a group of fish that for unknown reasons appear to be in worldwide decline. EelB was characterized and used to study the action of the selenium (Se), which is just one of many ecotoxicants that might be contributing to their decline. EelB was developed from the outgrowth of adherent cells from brain explants of the American eel. EelB cells have been grown routinely in L-15 with 10 % fetal bovine serum (FBS), undergone over 100 passages, and cryopreserved successfully. The cells from late passage cultures (>45) were polygonal, formed capillary-like structures (CLS) on Matrigel, and stained immunocytochemically for von Willebrand Factor (vWF) and for three tight junction proteins, zonula occludens-1 (ZO-1), claudin 3, and claudin 5. These results suggest that eelB is an endothelial cell line, one of the few from fish and the first from brain. Despite this, eelB did not respond to 2,3,7,8-tetrachlorodibenzo-p-dioxin (TCDD) with the induction of CYP1A protein. The cells from early passage cultures (<20) had more varied shapes and did not form CLS on Matrigel. Only cells from early passage cultures formed in suspension 3-dimensional aggregates that had some cells expressing alkaline phosphatase and nestin. These cells are thought to be neural stem cells and the aggregates, neurospheres. The emergence of endothelial-like cells upon the continued subcultivation of cells from early passage cultures that had neural stem cells has been described previously for mammals, but this is a first for teleosts. Remarkably cells from all passage levels stained strongly for senescence-associated β-galactosidase (SA β-Gal) activity. EelB was used to study the effects of Se deprivation and of Se addition. This was done with three exposure media: complete growth medium (L15/FBS), serum-free medium (L15), and minimal medium (L15/ex). L15/ex contains only galactose and pyruvate and no obvious source of Se, allowing Se deprivation to be studied. In L15/ex, eelB cells survived for at least 7 days, formed capillary-like structures (CLS) on Matrigel, and migrated to heal wounds. Three Se compounds were added to cultures: selenite, selenate, and selenomethionine (SeMet). Adding selenite or selenate to eelB cell cultures for 24 h caused dose-dependent declines in cell viability, regardless of the exposure media. Although varying with exposure media and viability endpoints, selenite was approximately 70-fold more cytotoxic than selenate. By contrast, 24 h exposures to either DL- or L-SeMet in the three media caused little or no cytotoxicity. However, for 7-day exposures in L15/ex, DL-, and L-SeMet were very cytotoxic, even at the lowest tested concentration of 31 µM. By contrast in L15 and L15/FBS, cytotoxicity was only observed with 500 and 1,000 µM L-SeMet. In L15/FBS, eelB continued to migrate and form CLS in the presence of SeMet but at 500 µM cell migration appeared stimulated. As judged from a colony-forming assay over 14 days in L15/FBS, 500 and 1,000 µM DL- and L-SeMet inhibited cell proliferation. Overall, the responses of eel cells to selenium depended on the selenium form, concentration, and exposure media, with responses to SeMet being most dependent on exposure media. Cell lines are a resource for research into applied and basic scientific issues and eelB should be useful for a wide range of problems, especially exploring the actions of ecotoxicants and viruses of the eel, all of which might be contributing to their population decline.

Sophia R. Bloch (2017). Development of an endothelial-like cell line from the brain of the American eel and its use to study the effects of selenium. UWSpace. http://hdl.handle.net/10012/11313