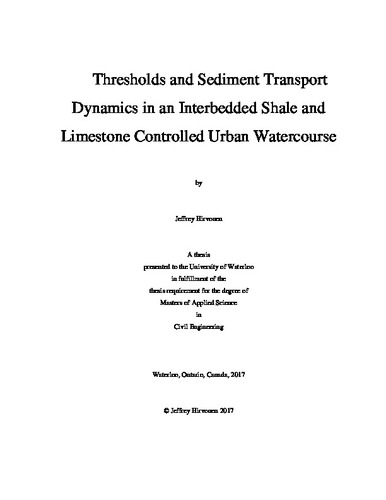 Sediment transport is a fundamental component of research into river morphology and related engineering practices. The relationship between flow and sediment particle entrainment underpins many of the empirical models used to estimate sediment transport dynamics. The scientific literature reports a research gap specific to the thresholds of mobility of different sized particles in non-gravel bed systems, including those in bedrock channels. Particle tracer technology was used to study coarse sediment entrainment and transport dynamics in an urban, bedrock controlled stream channel in Toronto, Ontario, Canada. Passive integrated transponders were inserted in constrained and unconstrained particles within an incised reach of stream. The distribution of particles transport distances conformed to a two-parameter gamma distribution model, which assumes integrations of the travelled series of steps and rests. Size selective dependency of path length was found to increase for coarser clasts, as compared to observed conditions for gravel-bed systems. Coarser particles were also found to transport in an unconstrained mode, as compared to finer grains. A force exceedance model was applied to further test the performance of reported size selective transport relationships for the study site. Many particles were found to transport at critical shear ratios less than 1, when assuming a modified Shields’s based model for entrainment. Field data was then used to determine a reference shear based on the smallest magnitude competent storm. The results show that, when compared to alluvial gravel-bed conditions, finer particles require larger thresholds to mobilize and the inverse is true for coarser particles. Using the reference shear conditions, rates of sediment transport were calculated and compared to common models for coarse particle transport. The results confirm size selectivity by grain class and indicate differentiations between fine and coarse transport relationships for the site. This research confirms non-conformity of particle entrainment and transport relationships for the study site, when compared to common empirical model for gravel-bed rivers. The results may be used to obtain critical entrainment parameters and sediment transport relationships, which can then be used to inform design criteria for regional watercourses having like lithology and morphology.