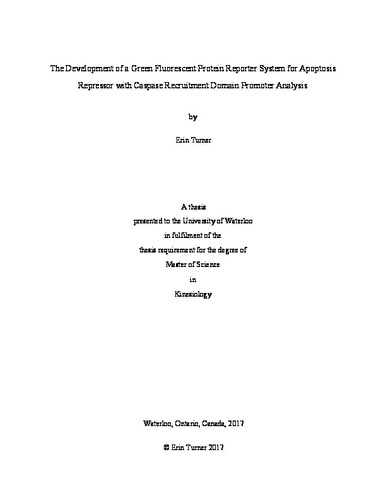 Apoptosis is a form of controlled cell death that is important to tissue homeostasis. There are a variety of pro- and anti-apoptotic proteins that play an important role in the regulation of cell death. Apoptosis repressor with caspase recruitment domain (ARC) is a potent anti-apoptotic protein that has the ability to inhibit cell death through all the major apoptotic pathways. ARC is highly expressed in post-mitotic tissue such as cardiac muscle, neurons, and skeletal muscle, but is expressed at much lower levels in other tissues. However, ARC protein levels can increase dramatically when some tissues become cancerous. Research has shown that this increase in ARC protein content results in resistance to chemotherapeutic drugs. Additionally, decreasing ARC protein in cancer cell lines has been shown to be effective in increasing the sensitivity of these cancer cells to apoptosis-inducing agents. Therefore, ARC presents an attractive therapeutic target. The development of a reporter system that is driven by the ARC promoter region would allow for the monitoring of ARC expression during a high-throughput drug screen. Green fluorescent protein (GFP) is a valuable tool commonly used to analyse gene expression in cells and presents numerous advantages over a luciferase-based reporter system. First, GFP can be detected without the lysing the cells and without the addition of costly substrates. Second, fluorescence can be detected by a simple plate reader assay. Thus, a GFP reporter plasmid under the control of the ARC promoter region was developed. However, GFP production was limited in cells transfected with the reporter plasmid and significant changes in GFP fluorescence as ARC protein levels increased was not detected by the fluorescent plate reader assay. Ultimately, more research is needed to develop a reporter plasmid that responds to ARC promoter activation and can be detected by a plate reader assay.