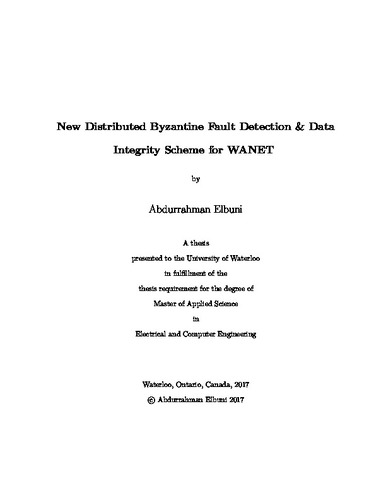 Wireless ad-hoc networks (WANET) with multi-hop communication are subject to a variety of faults and attacks, and detecting the source of any fault is highly important to maintain the quality of service, confidentiality, and reliability of an entire network operation. Intermediate byzantine nodes in WANET could subvert the system by altering sensitive routed information unintentionally due to many reasons such as power depletion, software bug, malware, and environmental obstacles. This thesis highlights some of the research studies done in the area of distributed fault detection (DFD) and proposes a solution to detect Byzantine behavior cooperatively. The present research will focus on designing a scalable distributed fault detection (DFD) algorithm to detect byzantine nodes who permanently try to distort or reroute information while relaying a message from one node to another, complimentary to that, a symmetric distributed cryptography scheme will be employed to continuously validates the data integrity of a routed message. The main hypothesis of the research is that if a wireless ad-hoc network is been divided into N number of groups (classes) with relatively equal number of members, each group of nodes can cooperatively protect the network from every other group. Practically, each group of nodes will be assigned to a distinct shared key; nodes with similar group assignment shall guard the integrity of a routing path by incorporating their own secret message authentication code (MAC) that can be only validated by nodes belonging to the same group contributing to the same routing path. If a node from Group(i) detects a tampering event, it should either store and delay a fault report or embed a fault report to the same routed message and forward it to the Master Node (Destination) if applicable. Further report message overhead optimization has been devised to reduce the energy cost. Moreover, the empirical results have shown that the more reported evidence the master node can collect, the more accuracy of detection can be reached based on an incremental stream of evidence that contains information about both healthy and unhealthy nodes; so that every healthy report type can justify the unhealthy false report. The heuristic simulation based study considered many different aspects of the system for evaluation such as detection accuracy, fault model, the optimal number of classes, energy consumption, the impact of mobility, and network lifetime. The iGraph network simulation tool has been employed for visualization and graph manipulation, whereas, Python programming language has been utilized in conjunction to implement and simulate the DFD algorithm and generate the results.