Drifting Outside of the City 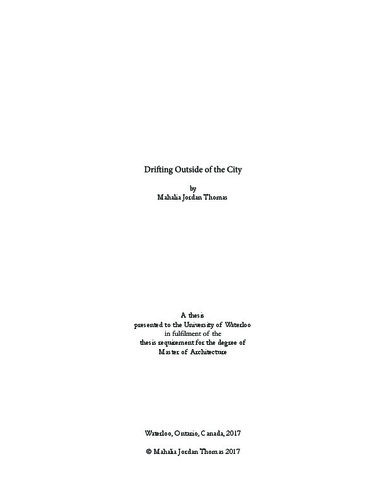 There are spaces in Toronto where the city’s grid is forced to give way. Remnants of outdated infrastructure, deep geographic indentations, and natural elements appear, disrupting the constraints that govern our urban environment. The spaces remaining have been shaped by industry, re-purposed or abandoned; they are subterranean, and uninhabited, or simply forgotten and absorbed by the growing city. This is an exploration of a found park, six existing terrains in Toronto including; a streetscape, inactive rail path, ravine, river valley and de-industrialized waterfront. Individually, these terrains are often hidden from the urban realm, disorientating and open to interpretation. Connected, they create a green loop around the inner city. This is an exploration recorded in four methods; walking, photography, photomontage and projections. It is a record of my wandering in various terrains and the different lenses that I found and used to understand these spaces. This is a documentation of the existing, as well as an exploration of a perception of space. It is a record of the temporal experience of passage, of the unfolding of a narrative, and of the unique character of these spaces. The result is a series of curated walks, amplifying the threshold between city and anti-city. I want to reveal the familiar as unfamiliar, and curate the experience of this hidden landscape, and connecting it to our built environment. I had to suppress the urge to fix the spaces, clean them up, connect them, smooth them out. I wanted to approach each of these spaces delicately, hinting at their past, present, and projecting ambitions for future relationships with them. Working with the themes of cultural memory, social dialogue, and geographic history to create new stories, and an evolving backdrop for city life.