Transitive Factorizations of Permutations and Eulerian Maps in the Plane 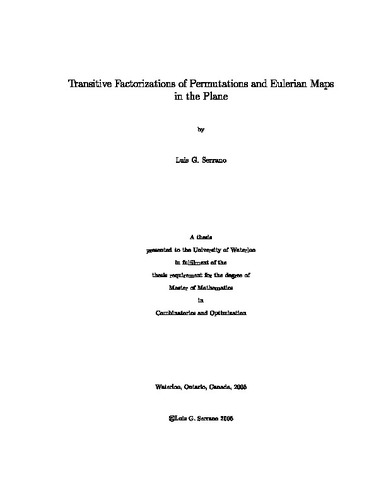 The problem of counting ramified covers of a Riemann surface up to homeomorphism was proposed by Hurwitz in the late 1800's. This problem translates combinatorially into factoring a permutation with a specified cycle type, with certain conditions on the cycle types of the factors, such as minimality and transitivity. Goulden and Jackson have given a proof for the number of minimal, transitive factorizations of a permutation into transpositions. This proof involves a partial differential equation for the generating series, called the Join-Cut equation. Furthermore, this argument is generalized to surfaces of higher genus. Recently, Bousquet-M&eacute;lou and Schaeffer have found the number of minimal, transitive factorizations of a permutation into arbitrary unspecified factors. This was proved by a purely combinatorial argument, based on a direct bijection between factorizations and certain objects called <em>m</em>-Eulerian trees. In this thesis, we will give a new proof of the result by Bousquet-M&eacute;lou and Schaeffer, introducing a simple partial differential equation. We apply algebraic methods based on Lagrange's theorem, and combinatorial methods based on a new use of Bousquet-M&eacute;lou and Schaeffer's <em>m</em>-Eulerian trees. Some partial results are also given for a refinement of this problem, in which the number of cycles in each factor is specified. This involves Lagrange's theorem in many variables.