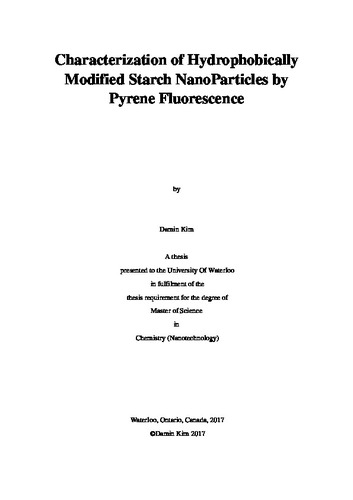 Starch nanoparticles (SNPs) were hydrophobically modified with propionic (C3) and hexanoic (C6) anhydride via esterification. Different degrees of substitution (DS) of the hydroxyl groups of the SNPs were achieved by varying the reaction conditions. The relative hydrophobicity of the hydrophobically modified SNPs (HM-SNPs) was examined with pyrene fluorescence. The hydrophobes covalently attached to the SNPs conferred an amphiphilic character to the SNPs whereby hydrophobic microdomains were generated and stabilized by the hydrophilic SNPs in aqueous solution. The hydrophobic microdomains of the HM-SNPs were probed with the hydrophobic dye, pyrene. Several parameters related to the photophysical properties of pyrene, such as the (I1/I3)o ratio, the bimolecular rate constant for quenching k¬q, the natural lifetime o, and the equilibrium constant for the binding of pyrene to the HM-SNPs KB, were found to respond to the expected hydrophobicity of the HM-SNPs, and thus the level of hydrophobic modification. These four parameters, (I1/I3)o, k¬q, o, and KB, were examined as a function of the DS and the type of hydrophobic modification (propionic versus hexanoic acid). As the DS of hexanoic acid of the HM-SNPs increased, pyrene experienced a decrease in the polarity of its local environment evident from a decrease in (I1/I3)o while the microviscosity of the hydrophobic aggregates increased as indicated by an increase in o and a decrease in kq. Moreover, the interactions between SNPs and pyrene became stronger with increasing DS and were dependent on the surface area of the SNPs. All the parameters confirmed that the hydrophobicity of the HM-SNPs increased with increasing DS of hexanoic acid. The parameters also demonstrated that for a same DS, the environment generated by the SNPs modified with hexanoic acid was more hydrophobic than that of the SNPs modified with propionic acid. As it turns out, the photophysical parameters of pyrene retrieved for the SNPs modified with propionic acid were similar to those obtained with the naked SNPs. A model was proposed to account for the increase in SNP diameter due to aggregation observed at high SNP concentration. Its validity was supported by the good agreement obtained when comparing the average diameter predicted by the model with the hydrodynamic diameter of the SNPs determined by DLS. These studies led to the conclusion that hexanoic anhydride modification of SNPs appears to be more suitable than propionic acid modification to increase the hydrophobicity of SNPs. These measurements carried out with pyrene demonstrate that HM-SNPs can be generated where the level of hydrophobicity can be gauged based on the value of the (I1/I3)o, k¬q, o, and KB parameters. Finally, interactions between pyrene and SNPs seem to occur at the SNPs surface which is reduced upon aggregation of the SNPs.