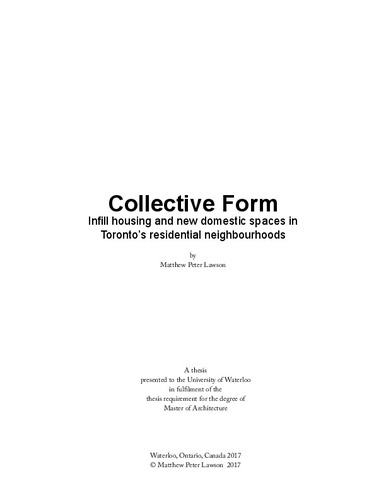 Toronto is facing a housing crisis, the symptoms of which are apparent across the city; property values are increasing at a dizzying rate, rental vacancy rates are at historic lows, poverty and displacement are being made more visible by waves of gentrification. And yet, Toronto is undergoing a boom of residential construction, with high rise condominiums changing the fabric of large parts of the city. Housing in this climate is conceived as a speculative commodity, rather than as a space of dwelling; this is a crisis not only of affordability and access to housing, but also the quality of domestic space. This condition is not simply an issue of the current supply of housing, but inherent to its production and form. The thesis proposes an alternative to the contemporary production of housing, as a critical response to the housing crisis and contemporary domestic space. The historical evolution of residential typologies in the city makes legible policy and planning tools as well as socio-economic tendencies. The initial subdivision of large scale properties in the early city into individual residential lots and accompanying commodification of property led to the large-scale production of semi and detached single family homes as the dominant historic type in the city, creating a perceived image of Toronto as a ‘City of Homes’ that persists into the present. Post war development expanded this production of single family homes to the suburbs, while displacing substantial urban communities through Urban Renewal schemes and the construction of high rise towers. While larger social and economic institutions have undergone rapid changes characterised by the current tendency towards neoliberalization, domestic space is still structured around the institution of the nuclear family, and the type of the single-family home. The thesis positions itself in the tradition of urban analysis and infill typologies proposed by architects like Diamond and Myers and George Baird, and associated reform planning movements that emerged in response to these patterns in the 1970’s, while imagining the possibilities of new domestic spaces that reflect contemporary living conditions. Building upon this precedent of infill housing, the proposal contextualizes low-rise high density development within Toronto’s residential Neighbourhoods; large geographic areas of single family homes currently protected from any densification. The design proposal acts as a synthesis to these ideas about the form of contemporary domestic space and the contextual nature of infill, creating increased density for reasons of affordability for residents, but also to respond to both social and ecological sustainability made possible by increased density and more efficient land use. The logic of the building form is contextually responsive, establishing a series of setbacks based on the existing structure of the neighbourhoods, as well as manipulating the forms based on subtractive planes. A resident led development model is proposed to resist the commodification of housing, while creating spaces that are more suitable for a diverse range of contemporary domestic realities with reference both to international models, as well as a long history of cooperative housing in Toronto. The internal organization of the building reinforces these social organizational structures through the provision of common spaces and the collectivization of domestic labour. The replication of these typological experiments across the urban fabric allows us to envision the production of new forms of collective dwelling as a radical proposal for transforming the city and domestic space as a right to the city.