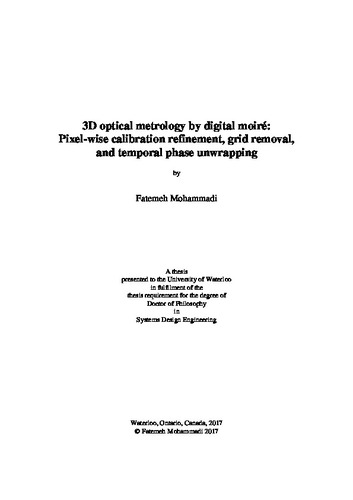 Fast, accurate three dimensional (3D) optical metrology has diverse applications in object and environment modelling. Structured-lighting techniques allow non-contacting 3D surface-shape measurement by projecting patterns of light onto an object surface, capturing images of the deformed patterns, and computing the 3D surface geometry from the captured 2D images. However, motion artifacts can still be a problem with high-speed surface-motion especially with increasing demand for higher measurement resolution and accuracy. To avoid motion artifacts, fast 2D image acquisition of projected patterns is required. Fast multi-pattern projection and minimization of the number of projected patterns are two approaches for dynamic object measurement. To achieve a higher rate of switching frames, fast multi-pattern projection techniques require costly projector hardware modification or new designs of projection systems to increase the projection rate beyond the capabilities of off-the-shelf projectors. Even if these disadvantages were acceptable (higher cost, complex hardware), and even if the rate of acquisition achievable with current systems were fast enough to avoid errors, minimization of the number of captured frames required will still contribute to reduce further the effect of object motion on measurement accuracy and to enable capture of higher object dynamics. Development of an optical 3D metrology method that minimizes the number of projected patterns while maintaining accurate 3D surface-shape measurement of objects with continuous and discontinuous surface geometry has remained a challenge. Capture of a single image-frame instead of multiple frames would be advantageous for measuring moving or deforming objects. Since accurate measurement generally requires multiple phase-shifted images, imbedding multiple patterns into a single projected composite pattern is one approach to achieve accurate single-frame 3D surface-shape measurement. The main limitations of existing single-frame methods based on composite patterns are poor resolution, small range of gray-level intensity due to collection of multiple patterns in one image, and degradation of the extracted patterns because of modulation and demodulation processes on the captured composite pattern image. To benefit from the advantages of multi-pattern projection of phase-shifted fringes and single-frame techniques, without combining phase-shifted patterns into one frame, digital moiré was used. Moiré patterns are generated by projecting a grid pattern onto the object, capturing a single frame, and in a post-process, superimposing a synthetic grid of the same frequency as in the captured image. Phase-shifting is carried out as a post-process by digitally shifting the synthetic grid across the captured image. The useful moiré patterns, which contain object shape information, are contaminated with a high-frequency grid lines that must be removed. After performing grid removal, computation of a phase map, and phase-to-height mapping, 3D object shape can be computed. The advantage of digital moiré provides an opportunity to decrease the number of projected patterns. However, in previous attempts to apply digital phase-shifting moiré to perform 3D surface-shape measurement, there have been significant limitations. To address the limitation of previous system-calibration techniques based on direct measurement of optical-setup parameters, a moiré-wavelength based phase-to-height mapping system-calibration method was developed. The moiré-wavelength refinement performs pixel-wise computation of the moiré wavelength based on the measured height (depth). In measurement of a flat plate at different depths, the range of root-mean-square (RMS) error was reduced from 0.334 to 0.828 mm using a single global wavelength across all pixels, to 0.204 to 0.261 mm using the new pixel-wise moiré-wavelength refinement. To address the limitations of previous grid removal techniques (precise mechanical grid translation, multiple-frame capture, moiré-pattern blurring, and measurement artifacts), a new grid removal technique was developed for single-frame digital moiré using combined stationary wavelet and Fourier transforms (SWT-FFT). This approach removes high frequency grid both straight and curved lines, without moiré-pattern artifacts, blurring, and degradation, and was an improvement compared to previous techniques. To address the limitations of the high number of projected patterns and captured images of temporal phase unwrapping (TPU) in fringe projection, and the low signal-to-noise ratio of the extended phase map of TPU in digital moiré, improved methods using two-image and three-image TPU in digital phase-shifting moiré were developed. For measurement of a pair of hemispherical objects with true radii 50.80 mm by two-image TPU digital moiré, least-squares fitted spheres to the measured 3D point clouds had errors of 0.03 mm and 0.06 mm, respectively (sphere fitting standard deviations 0.15 mm and 0.14 mm), and the centre-to-centre distance measurement between hemispheres had an error of 0.19 mm. The number of captured images required by this new method is one third that for three-wavelength heterodyne temporal phase unwrapping by fringe projection techniques, which would be advantageous in measuring dynamic objects, either moving or deforming.