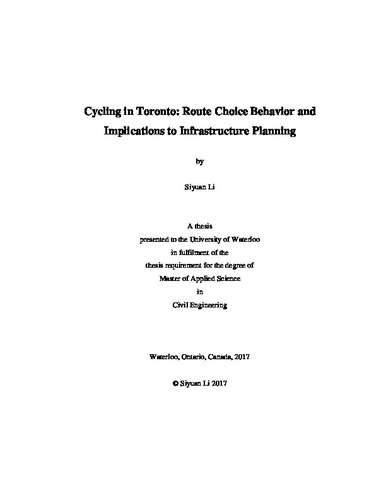 This research investigates the route choice behavior of cyclists in the City of Toronto using data collected from a smartphone application deployed to a large number of cyclists in the City. A total 4,556 cyclists registered for this study and logged over 30,000 commuting trips and 9,600 recreational trips over a study period of 9 months. The routes of individual cycling trips were estimated by a map-matching algorithm using second-by-second GPS readings of each trip and Toronto’s cycling road network. Personal information such as age, gender and residence, work or school place was collected from the participants on a voluntary basis. The collected cycling trip data were used to estimate path-size logit route choice models – variant of multinomial logit model for both commuting and recreational trips with various modeling options and combinations of candidate factors. The estimations of the models were evaluated using various performance measures and statistical tests, resulting in findings and conclusions on the optimal modeling structure, the factors that had statistical significant effects on cyclists’ routing decisions and the magnitude of these effects. The modeling results revealed the critical importance of cycling facilities such as bicycle lanes, multiuse pathways and trails on cyclists’ route choice decisions. It was shown that directness as measured by travel distance is the most important factor considered by commuting cyclists in making their route choices. It was also found that cyclists prefer cycling along major streets than local streets and do not mind traveling along transit routes. Furthermore, they tend to choose routes with more bicycle facilities especially dedicated off-street facilities. Comparing to recreational trips, the routes chosen for commuting were in general closer to the routes of minimum distance and energy consumption. In contrast, for recreational trips, cyclists were less concerned about the directness or the degree of challenges of the routes. For these trips, cyclists appeared to place safety at a higher priority instead of time as they showed a higher preference to dedicated bike facilities such as bike lanes and off-street bike paths than on-street mixed facility. Weather and personal attributes were not found to be statistical significant in affecting cyclists’ route choices. These along with other findings from this thesis research have provided valuable information for Toronto’s ongoing effort on bicycle network planning. The results could also be used to enhance route-finding tools available to cyclists for improved cycling experience.