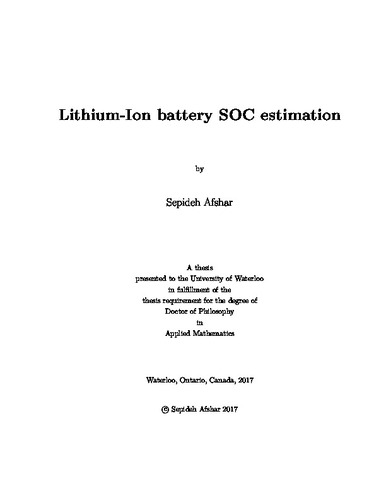 Lithium-ion batteries are frequently used in Hybrid electric vehicles (HEVs), which are taking the place of gas-engine vehicles. An important but not measurable quantity in HEVs is the amount of charge remaining in the battery in a drive cycle. The remaining charge is normally identified by a variable called state of charge (SOC). A potential way of estimating the SOC is relating this variable with the state of a dynamical system. Afterwards, the SOC can be estimated through an observer design. As a precise model, electrochemical equations are chosen in this research to estimate the SOC. The first part of this thesis considers comparison studies of commonly-used finite-dimensional estimation methods for different distributed parameter systems (DPSs). In this part, the system is first approximated by a finite-dimensional representation; the observer dynamics is a copy of the finite-dimensional representation and a filtering gain obtained through observer design. The main outcome of these studies is comparing the performance of different observers in the state estimation of different types of DPSs after truncation. The studies are then expanded to investigate the effect of the truncated model by increasing the order of finite-dimensional approximation of the system numerically. The simulation results are also compared to the mathematical properties of the systems. A modified sliding mode observer is improved next to take care of the system's nonlinearity and compensate for the estimation error due to disturbances coming from an external input. It is proved that the modified SMO provides an exponential convergence of the estimation error in the existence of an external input. In most cases, the simulations results of the comparison studies indicate the improved performance of the modified SMO observer. Approximation and well-posedness of two general classes of nonlinear DPSs are studied next. The main concern of these studies is to produce a low-order model which converges to the original equation as the order of approximation increases. The available results in the literature are limited to specified classes of systems. These classes do not cover the lithium-ion cell model; however, the general forms presented here include the electrochemical equations as a specific version. In order to facilitate the electrochemical model for observer design, simplification of the model is considered in the next step. The original electrochemical equations are composed of both dynamical and constraint equations. They are simplified such that a fully dynamical representation can be derived. The fully dynamical representation is beneficial for real-time application since it does not require solving the constraint equation at every time iteration while solving the dynamical equations. Next, the electrochemical equations can be transformed into the general state space form studied in this thesis. Finally, an adaptive EKF observer is designed via the low-order model for SOC estimation. The electrochemical model employed here is a variable solid-state diffusivity model. Compared to other models, the variable solid-state diffusivity model is more accurate for cells with Lithium ion phosphate positive electrode, which are considered here, than others. The adaptive observer is constructed based on considering an adaptive model for the open circuit potential term in the electrochemical equations. The parameters of this model are identified simultaneously with the state estimation. Compared to the experimental data, simulation results show the efficiency of the designed observer in the existence of modeling inaccuracy.