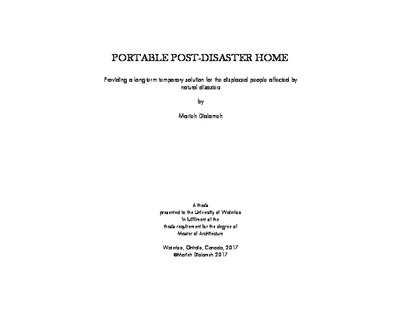 According to the United Nations statistics, since 2008, an average of 26.4 million people have been displaced per year because of natural disasters. In other words, one person loses his/her home every second. This is while these figures do not even include the number of people who have become homeless or are forced into living in terrible conditions because of wars and violence, or other issues such as financial difficulties. Sadly, the number of displaced people are increasing every year; this is while so many critical issues such as lack or shortage of proper housing or shelter, food, water, sanitary facilities and many other problems have still been left unresolved for those who have been displaced years ago. Because of the importance of the living environment on one’s mental and physical health, my thesis is focused on designing a mobile home that would be used as a long-term temporary solution primarily by the displaced people who have lost their home due to natural disasters. The proposed dwelling unit would be easily transportable and would include the basic sanitary facilities such as a toilet, wash basin, shower, and a mini kitchen, along with other spaces needed for a comfortable life. The tiny home would also be able to operate on the grid as well as off the grid for sites where no or little infrastructure is provided. The main goal of this thesis is to propose a light-weight, cost-effective, and compact dwelling unit by exploring the concept of “expandability”, and to provide the displaced people with a safe, healthy, and comfortable living environment until their permanent houses are reconstructed.