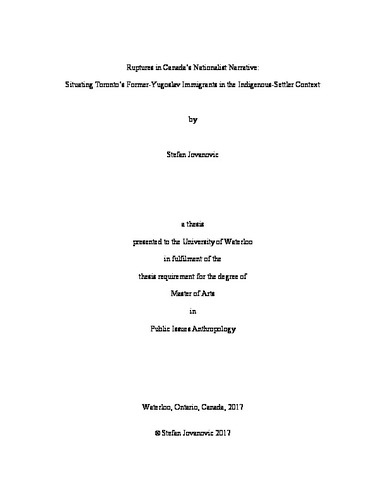 With the increasing prevalence of Indigenous discourses in the public consciousness, it becomes clear that the role of immigrants in the Indigenous-Settler dynamic has yet to be understood, and is particularly understudied in its Canadian context. However, given that nearly half of the population in the City of Toronto is composed of immigrants, it presents a rich research opportunity. As a Toronto-based immigrant from Former-Yugoslavia, I decided to conduct research with my own community. This thesis investigates the positionality of the Greater Toronto Area’s (GTA) Former-Yugoslav immigrants in the context of Indigenous-Settler relations. My research suggests that this community is situated within two ruptures of the Canadian nationalist narrative – paradoxical realms of multiple co-occurring imaginaries. As displaced peoples, they are privileged beneficiaries of the Canadian state while simultaneously being denied access to the Whiteness of the Canadian-Canadian ethnic identity. The ruptures are exposed by the relational positionality of Indigenous peoples to Former-Yugoslavs; in other words, Indigenous peoples play a central role in the identity of the GTA’s Former-Yugoslav immigrants. The very existence of Indigenous peoples in Canada shatters the illusion of inclusivity in the multiculturalist narrative by exposing (1) the rupture of injustices acted upon Indigenous peoples by the Canadian state, which maintains its marginalization of these communities via multiculturalism; and (2) the rupture of the relational nature of Whiteness by challenging it as a monolithic identifier of ethno-racial categorization in favour of pluralistic forms of identity. Thus, Former-Yugoslav immigrants are Settlers who have potential for solidarity with Indigenous peoples.