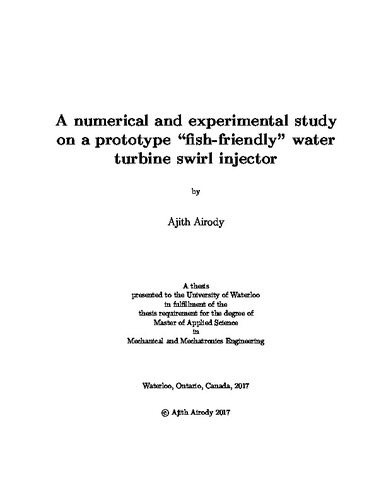 The ever increasing demands for energy world-wide has prompted research into and implementation of devices to harvest power from renewable sources of energy, such as hydroelectricity. Large-scale hydroelectric plants have existed for over a century, and are capable of producing over 10000 MW of power. However, such facilities are expensive and generally have a significant impact on the local ecosystem; as such, there are relatively few locations and communities that can support their construction. Small-scale hydroelectric facilities, which produce power up to 30 MW, are increasing in popularity since they do not divert the natural flow of the river and are capable of harnessing energy from smaller sources than their large-scale cousins one of the main concerns being the negative effects they can have on the local fauna. Specifically, fish inadvertently passing through the facility can be hurt or killed by the inlet guide vanes or rotor assembly through a variety of mechanisms, including striking the structure, being caught between rotating and stationary parts, or through dramatic changes in fluid pressure. In order to mitigate injury to fish passing through small-scale hydroelectric facilities, AlphaStar Hydro has developed a novel vaneless swirl injector to replace current inlet guide vane stages, which allows the fish to travel through with minimal damage, while still imparting the necessary swirl component onto the flow for proper turbine operation. This swirl injector is made up of a single spiral flighting wrapped around a central shaft. The main focus of this work is on quantifying and optimizing the flow through the vaneless swirl injector. Of primary concern is the axisymmetry of the flow exiting the injector, the pressure drop across it, and the swirl that it provides, all of which directly impact rotor performance. Based upon a preliminary patented design provided by AlphaStar Hydro, the flow field generated by the injector was determined through a computational fluid dynamics study. This provided the foundation for a geometric optimization study to maximize flow axisymmetry and swirl, while minimizing pressure loss. A 5 by 4 grid was setup using number of revolutions and pitch angle as variables. Four metrics were measured: axial axisymmetry, tangential axisymmetry, swirl number and pressure loss. Using the four metrics, an objective function was created and was subsequently optimized using a line search algorithm. The study concluded that the number of revolutions is not as important as the pitch angle and that the optimal geometry is 4 revolutions at a pitch angle of 25 degrees. A test rig was designed and constructed in order to test the newly optimized design with the addition of the nose cone. The setup is composed of a reservoir, a pump, a gate valve, a circle-to-rectangle transition, flow conditioning elements, the swirl injector, a test section and return plumbing. The rig was commissioned and initially characterized by measuring the velocity drift with time, the change in temperature with time, and the inlet velocity profile upstream of the injector. \par The experimental facility was coupled with numerical simulations to explore the flow field downstream of the optimized swirl injector with an attached nose cone, as would be the case upon rotor installation. The pressure, axial velocity and tangential velocity contours were analyzed to assess the performance of the swirl injector in its operational configuration, in preparation for rotor installation. A recirculation zone on the nose cone was observed, which was due to the flow separation on the nose cone. The swirl numbers and the axisymmetry metrics were compared between the optimization model and the nose cone model, revealing that there were no significant differences between the two. The experimentally measured velocity profiles were found to match well with the numerical profiles, as did the pressure distributions within the test section. This provided cross-validation of the experimental and numerical studies. The experimental data exhibited relatively high fluctuations in the velocity signals, however.