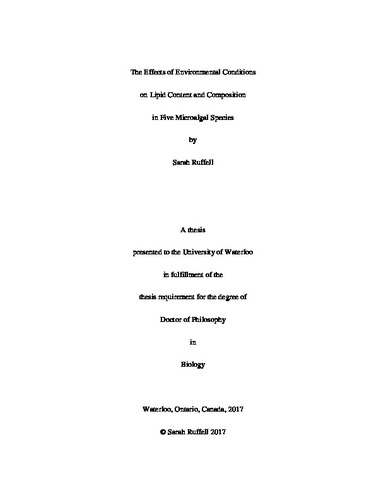 The objective of this thesis was to examine algal lipids for industrially relevant characteristics, in addition to the broader implications within the food web. A focus was placed on the pharmaceutical and aquaculture applications of these naturally synthesized fatty acids. Chapter 2 focused on the use of fatty acids as antibacterial agents in which multiple fatty acids were identified that were able to inhibit bacterial growth. Among the most effective fatty acids were 10:0, 16:1, 18:3(n-6), 20:4(n-6) and 22:2(n-6). Light cycle, light intensity, temperature and nutrients were manipulated to identify growth conditions that produced the greatest concentration of antibacterial fatty acids. Five microalgae were tested (Goniochloris sculpta, Boekelovia hooglandii, Phaeodactylum tricornutum, Chloridella simplex, and Rhodella maculata). Phaeodactylum tricornutum produced the largest total concentration of antibacterial fatty acids at 206 mg g-1 dry weight (dw), however B. hooglandii had the higher lipid productivity due to biomass productivity. For the 29 free fatty acids examined, on average, as the number of double bonds increased the degree of inhibition due to the acid increased. Through the demonstrated antibacterial effects of certain fatty acids, common structural characteristics could be linked to commercially valuable antibacterial properties. Chapter 3 investigated the species, B. hooglandii, in more detail to determine its potential use as aquaculture feedstock. This chapter examined the biomass productivity and nutritional profile in terms of protein, lipid (34 fatty acids), carbohydrates, and pigments (7 pigments) to establish whether this alga is a suitable feed. Within the aquaculture experiments performed in Chapter 3, the biomass productivity of B. hooglandii (0.52 g L-1 day-1 dw) was greater than three commonly used aquaculture algal feeds. In addition, the nutritional profile of this species was suitable for bivalve larvae and juvenile oysters. This experiment also identified trends and relationships within the nutritional profile; for example, a strong correlation was identified between total protein and growth rate. Identification of new algal feeds and correlations among nutritional properties provides insight into the dynamic nature of the nutritional profile during culturing. In Chapter 4, emphasis was placed on identifying trends in omega-3 fatty acid behaviour in species under varying light, temperature, and nutrient conditions, and examining how these differences could impact the food web. An overall trend was observed where lower light intensity, continuous light, vitamin B12 supplementation, and reduced temperatures resulted in greater omega-3 production. In addition, the omega-3 content of the five microalgae studied contained a large proportion of EPA (>50% of total fatty acid content). Further research is required to determine if these trends are broadly applicable. Of the five algae studied, G. sculpta produced the high omega-3 content and biomass productivity under the same growth conditions, resulting in an algal strain that can act as a rich source of omega-three in food webs and for industrial purposes. Overall, this thesis highlights 3 factors that were the most influential on algal performance: growth condition, species and lipid structure. By understanding how these three factors influence each other, experimental conditions can be established that allow for the increased productivity of desirable fatty acids, and a greater appreciation of the role of these fatty acids in industry and ecosystems.